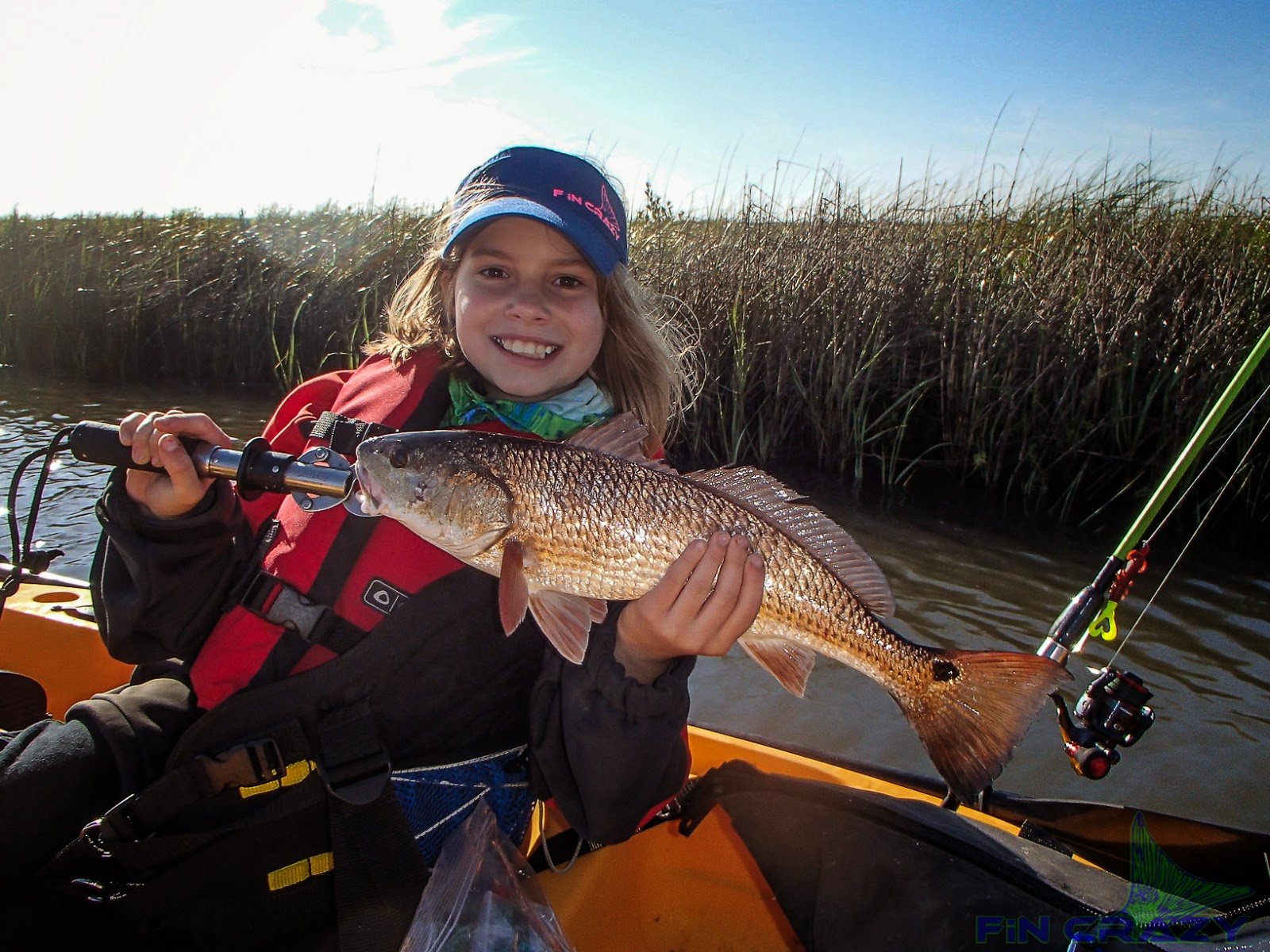 This past weekend I took my daughter, Charlee, on her first solo kayak fishing trip.  She has been in kayaks before, but it’s always been riding shotgun in the Hobie PA.  This time was different, this time she got to captain her own vessel, a Hobie Outback, and let’s just say she took to it like a pig to mud. 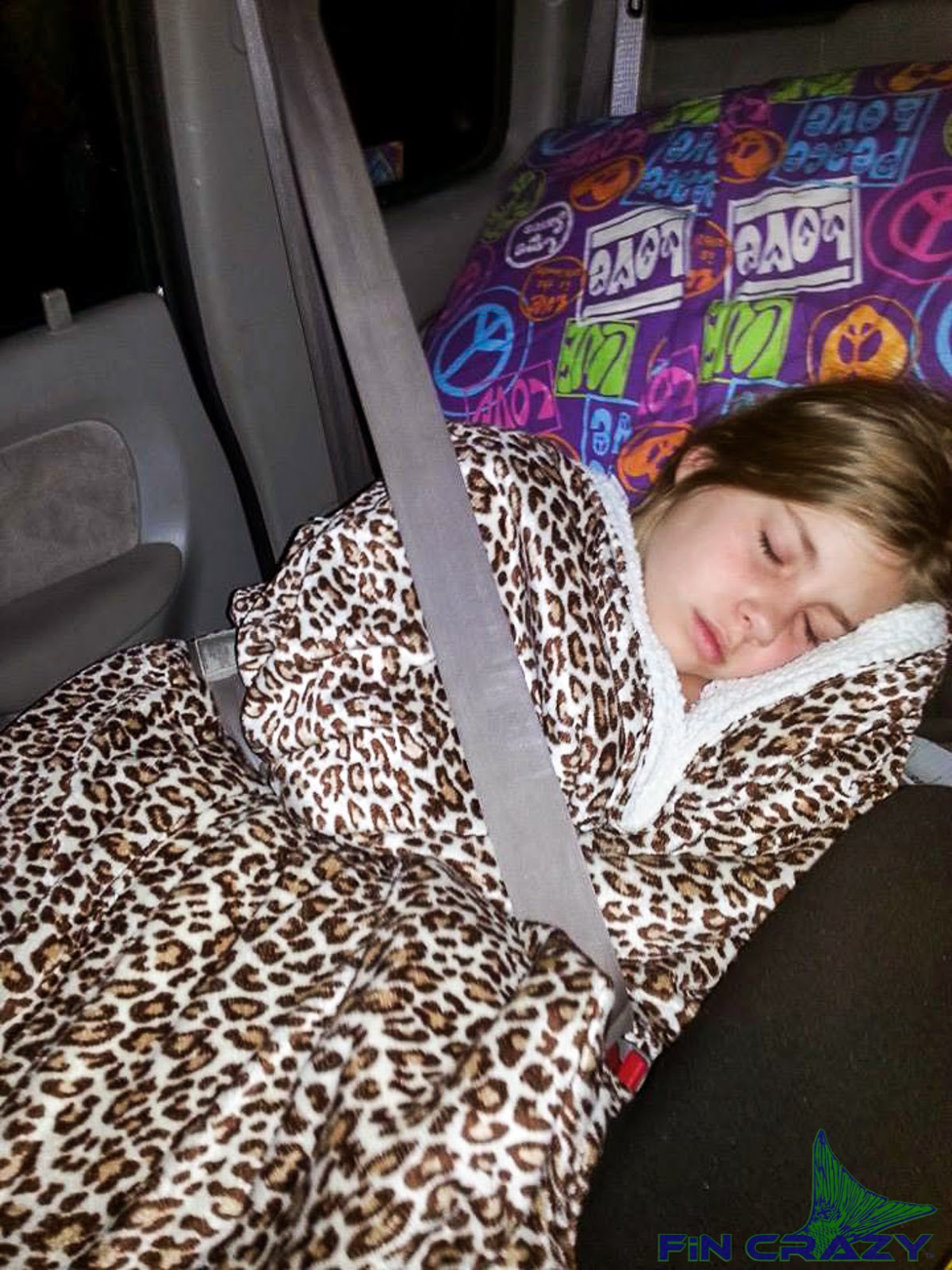 The morning started out at 3 a.m. with a long ride down to Grand Isle, and while it may have seemed like I was driving down alone, I was actually accompanied by a sleeping angel.   About 20 minutes before our destination, Charlee woke up, and she was raring to go.

As I launched the yak and held it against the shoreline, she jumped in it like it was a house boat, and with worry thrown to the wind, she unlatched the paddle and moved out into deeper water.  She was almost 40 yards away before I could get my Outback to the waters edge.
A little bit about Charlee….she just recently turned 10, has been hunting and fishing with me since she was three, she placed in her first fishing tournament when she was 6 , with almost a 5 lbs trout she landed on live shrimp in Lake Borgne, and she is my inspiration.  Almost three years ago, Charlee was diagnosed with Tourette  Syndrome, a neurological disorder that causes you to involuntarily “tic”, but don’t worry, only about 7% of people with Tourette’s blurt out curse words, she doesn’t do that.  Her tics are usually very subtle and if you weren’t paying attention, you would likely not even notice, simple head nods, spinning in circles, tapping her foot, little things.  But lately she has developed a verbal tic that sounds like a loud mouse squeak, and when she does it once, you can expect to hear it again and again until she is able to mimic the exact tone/pitch of the first squeak.  While not happy with Tourette’s, Charlee is very comfortable with herself and open to educating anyone she crosses paths with. 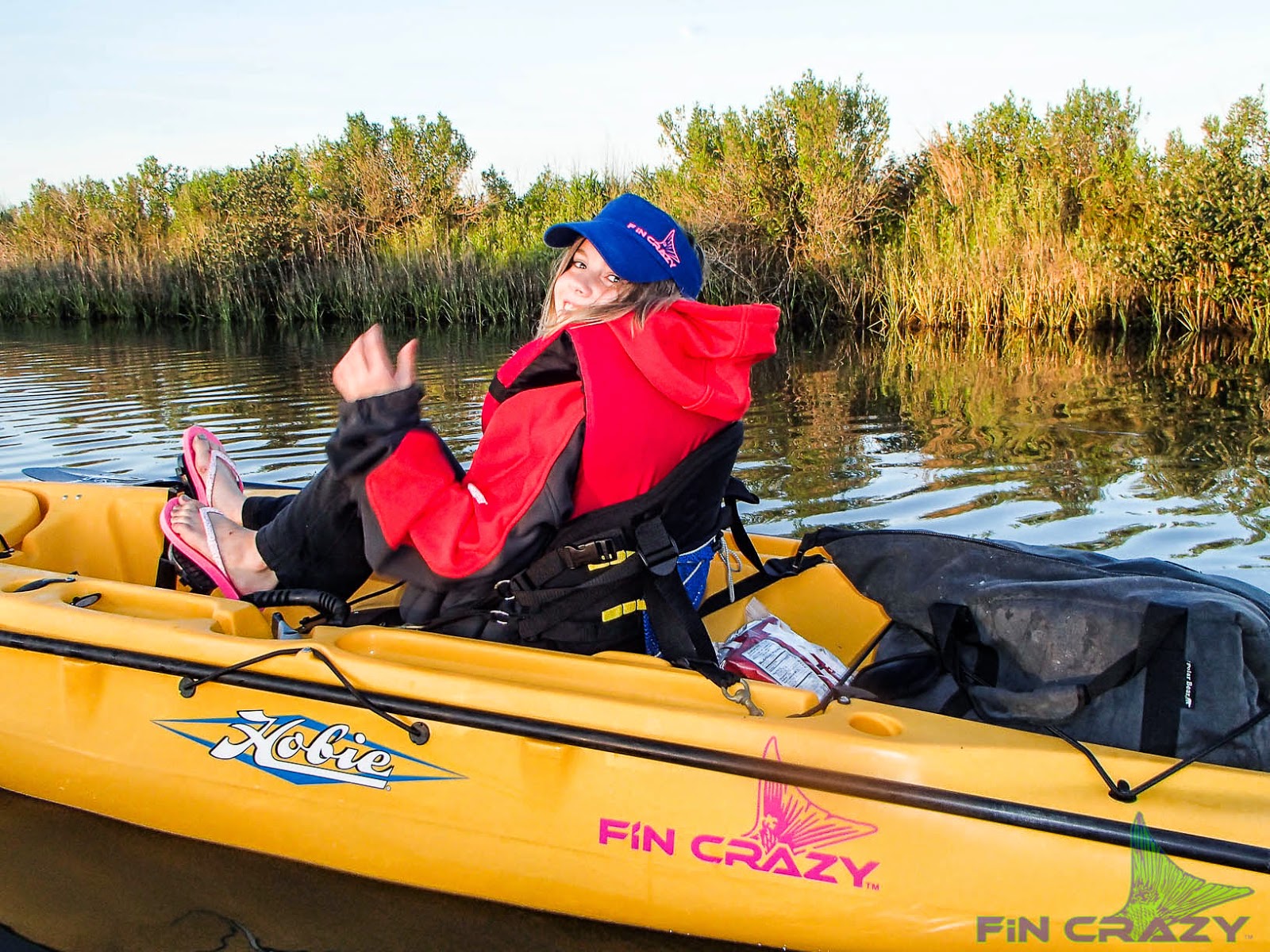 Now back to the day…..as I finally climbed into my yak and caught up with Charlee, she was still paddling, we did a little education on the mirage drive, shallow water, and the rudder operation , and then we were off.  We made it to a point with some fast moving water, but no fish were to be found. 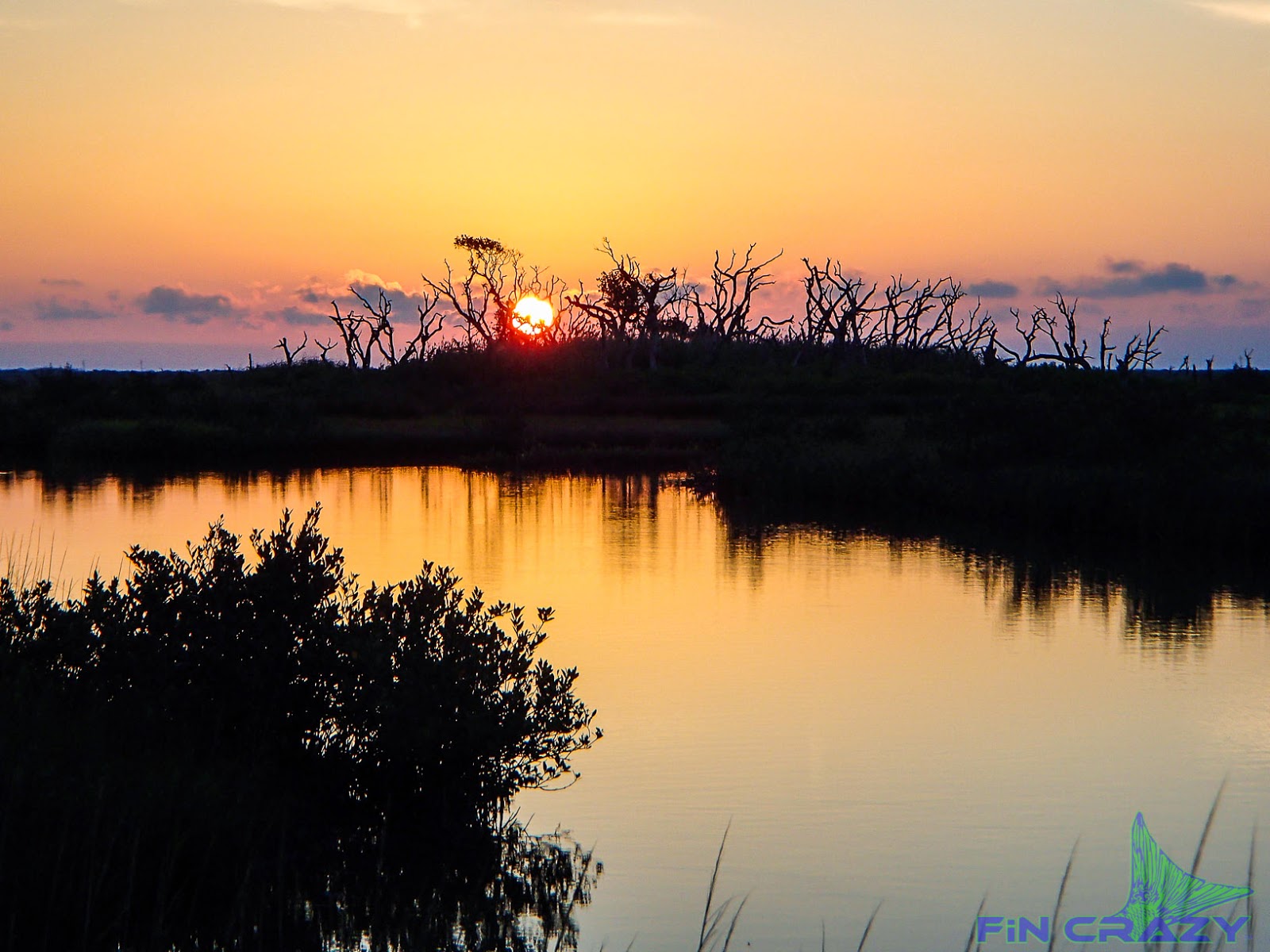 The sky was clear, the sun was shining, but the wind was doing a solid 15 mph, not the best day for a 10 year old to get acclimated to yak fishing, but she did.  We finally made it to a large canal that allowed us time to talk about what to look for and where to cast, and before you knew it, she was off on her first solo drift.  Charlee was slinging a gulp lure with a cork leading every cast, and as she drifted the run, I couldn’t help but sit back and observe her focus and commitment to the task at hand, I couldn’t have been more proud of how she was engaged in the battle to catch a fish, it was like nothing was going to stand in her way.  As she drifted down the canal, she came upon a cut in the marsh that was draining into the canal, I  quietly watched to see how she was going to handle the opportunity.  She locked in on the current change and the water running out of the marsh, like she had done this before, she drifted past the cut and then turned around and held her place peddling as she threw right in the middle of the drain.  I was impressed to say the least. I finally eased up to her and 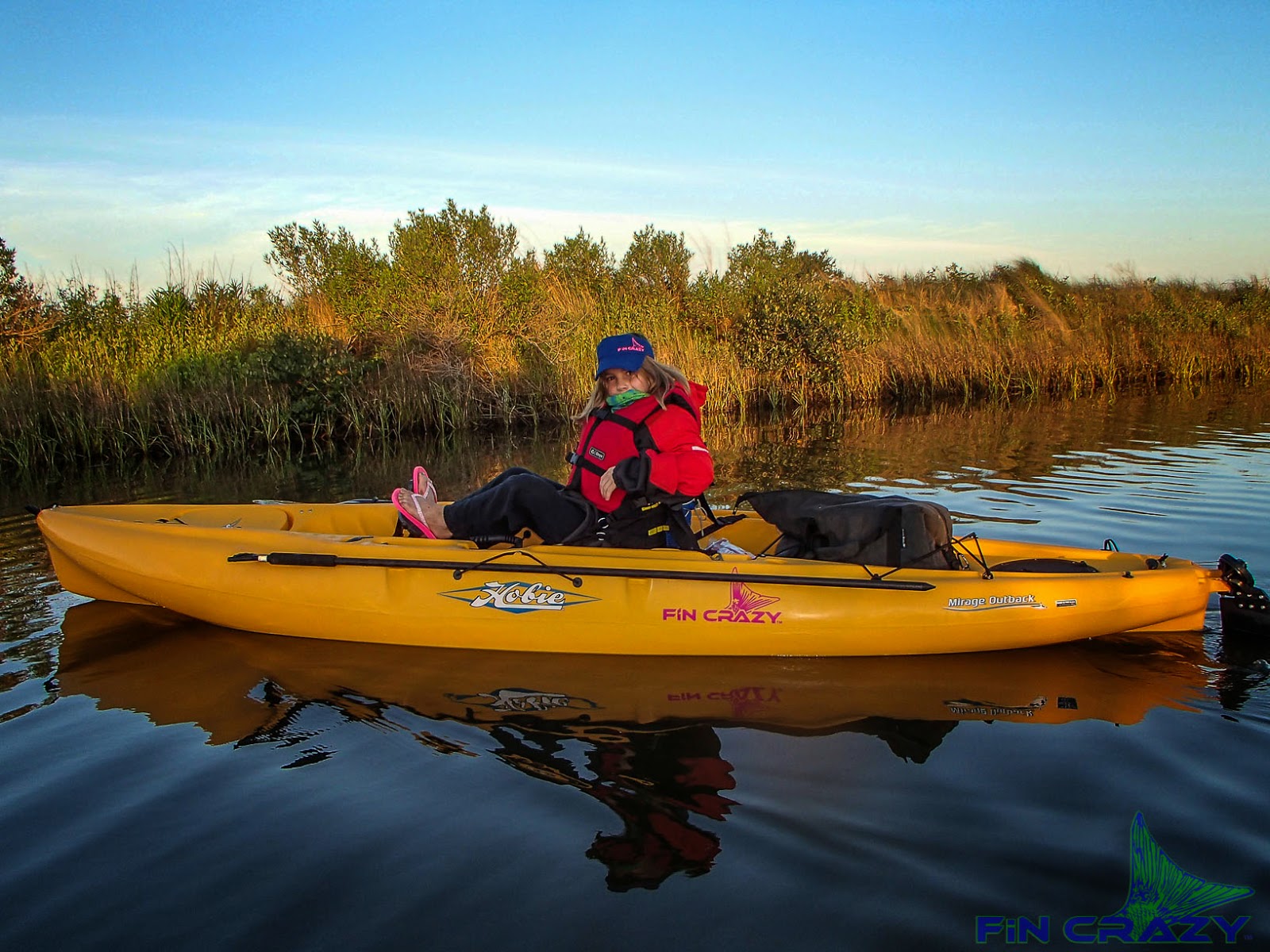 anchored her in with a stake out pole, she was amazed that a skinny black pole held her anchored still in the wind and current.  After about 10 minutes, and cast after cast, she was ready to move on, I couldn’t believe there wasn’t a fish there. 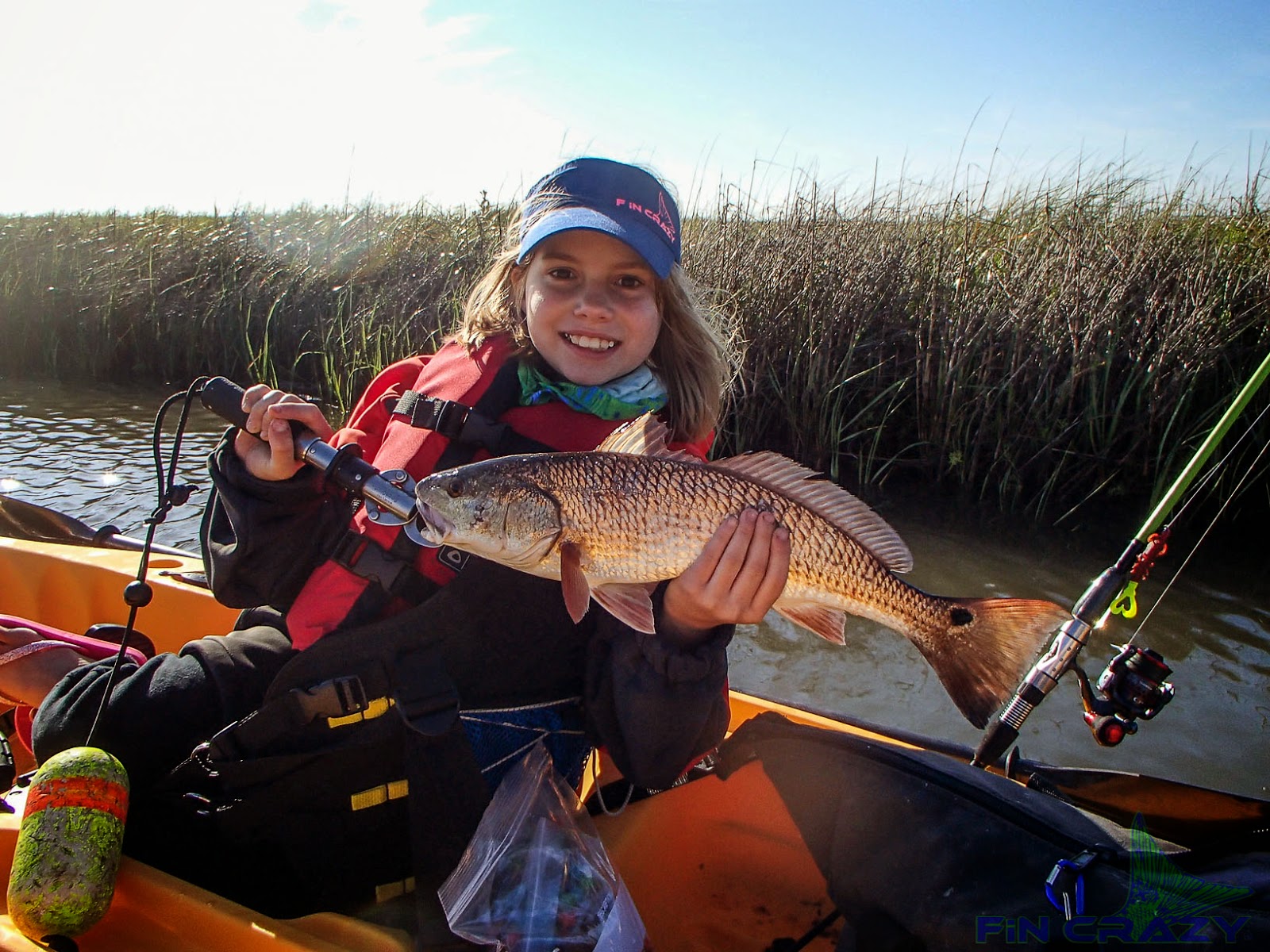 We continued the drift down the canal until finally we were able to hook up with a good 19 inch redfish.  She was so excited to hold the fish and observe all of the unique markings on the red, from its tail mark to the scars on its gill plate, you could feel her appreciation for what had just happened.  This fish turned out to be the only fish of the morning, but it made the start of the day a success. 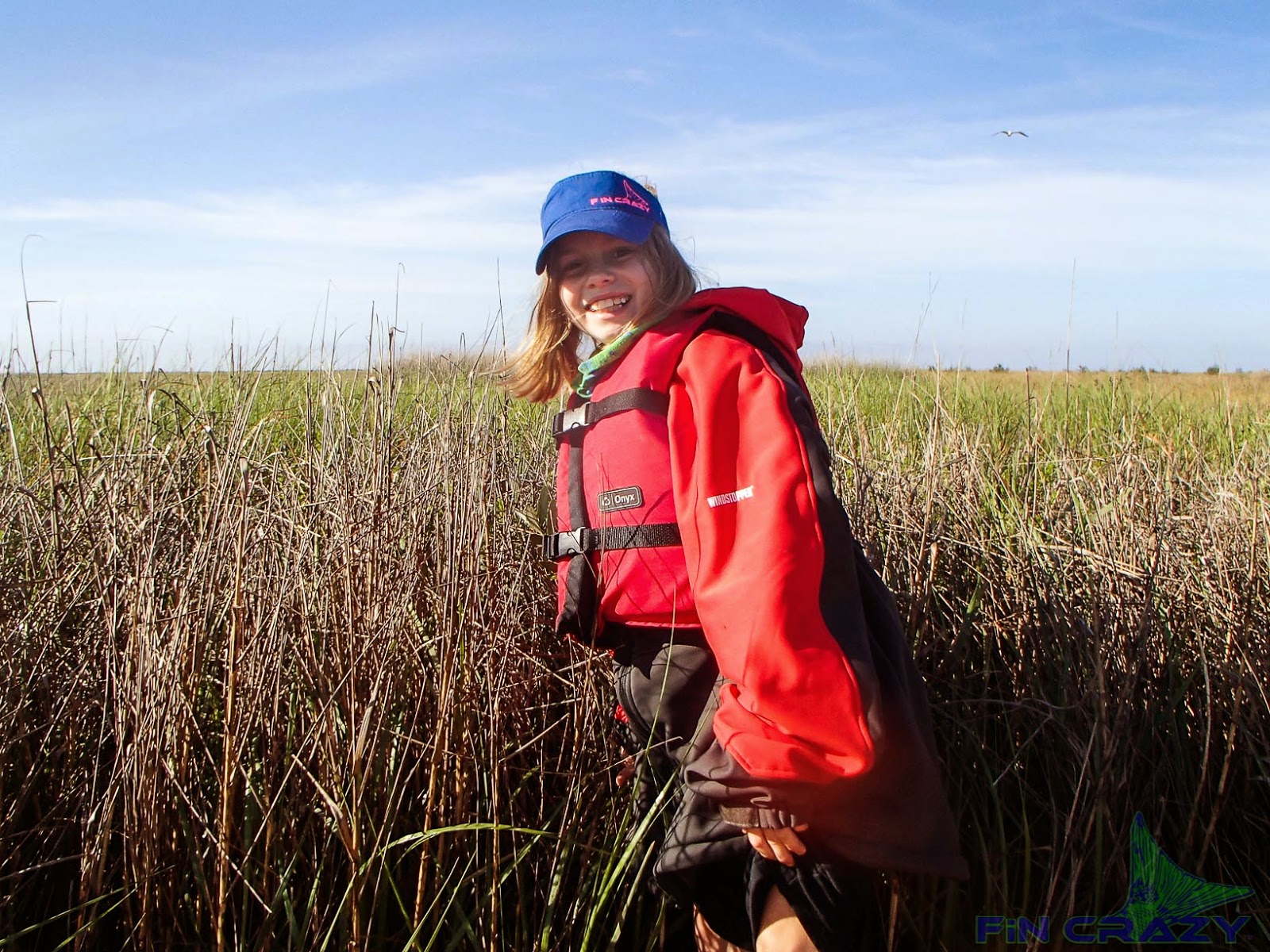 About an hour later, Charlee decided she wanted to get out the yak to explore some of the marsh, for those that don’t fish with females very often, that means take a bio break.  As I held her yak against the shoreline, she hopped out, finding out real fast that you need to get more than 5 feet in the grass before you don’t sink in mud, and began her battle of exploration against the rigid marsh grass that was almost as tall as she was.  As the exploration came to an end, so did the fishing, the wind was pushing 20 mph now and I made the suggestion of picking up and re-launching further down the road to more protected waters. 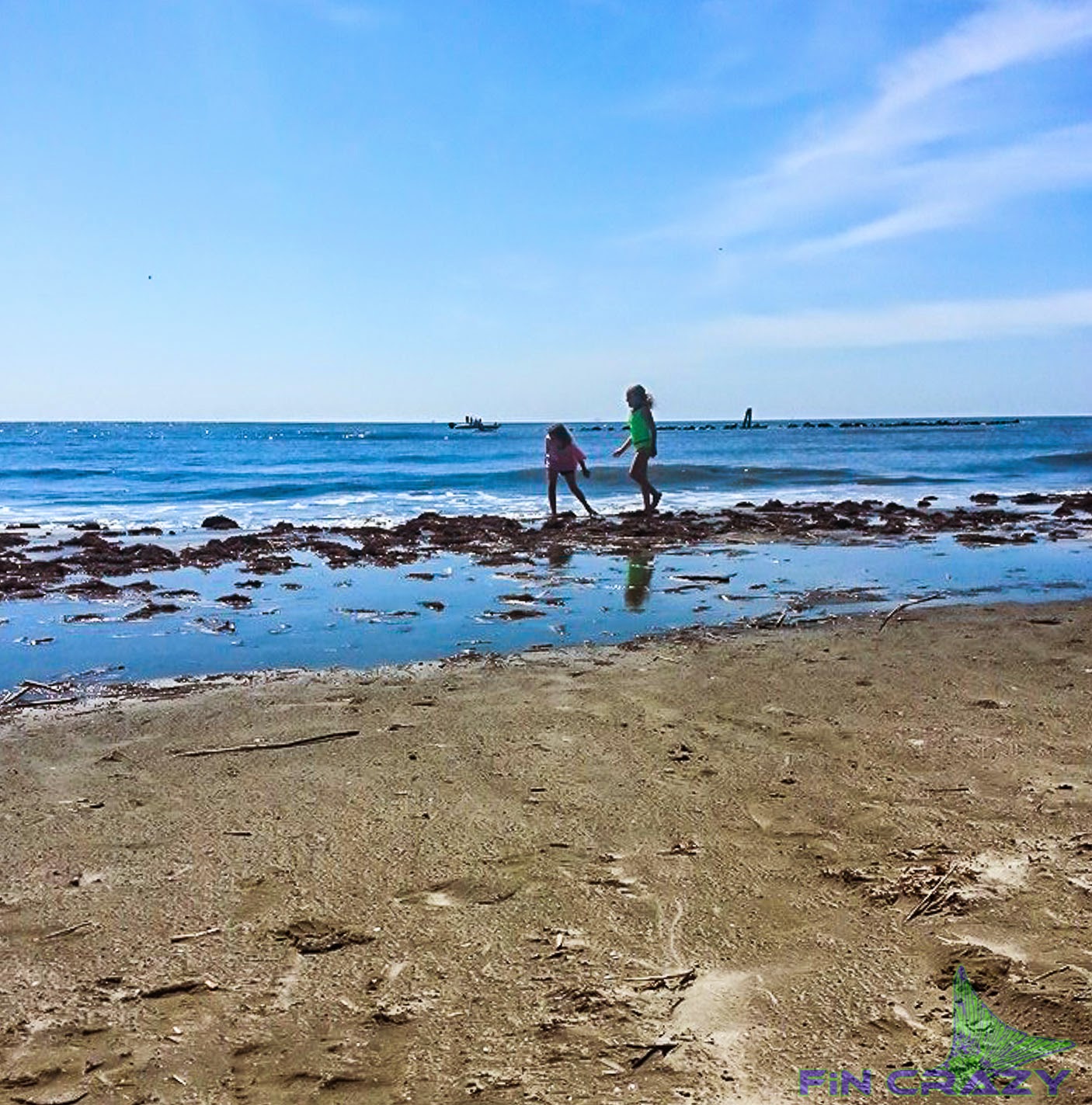 She was game, and that excited me, but this was her day, and whatever she wanted, she got.  As we approached the truck, I asked her again if she wanted to go fish some more, and she quickly replied, “if you want too, let’s go, but I would kind of like to go see the beach.”  With those words spoken, we loaded up and headed toward Elmer’s Island, for a day in the sand.


As we turned into the island, we crossed paths with Josh Thompson and his family, they invited us to their camping location at the state park, his daughter and mine have become friends over the past month.  So, our day ended with almost 3 hours of fishing and nearly 6 hours of beach time with the Thompsons, and a day I will cherish for years to come. 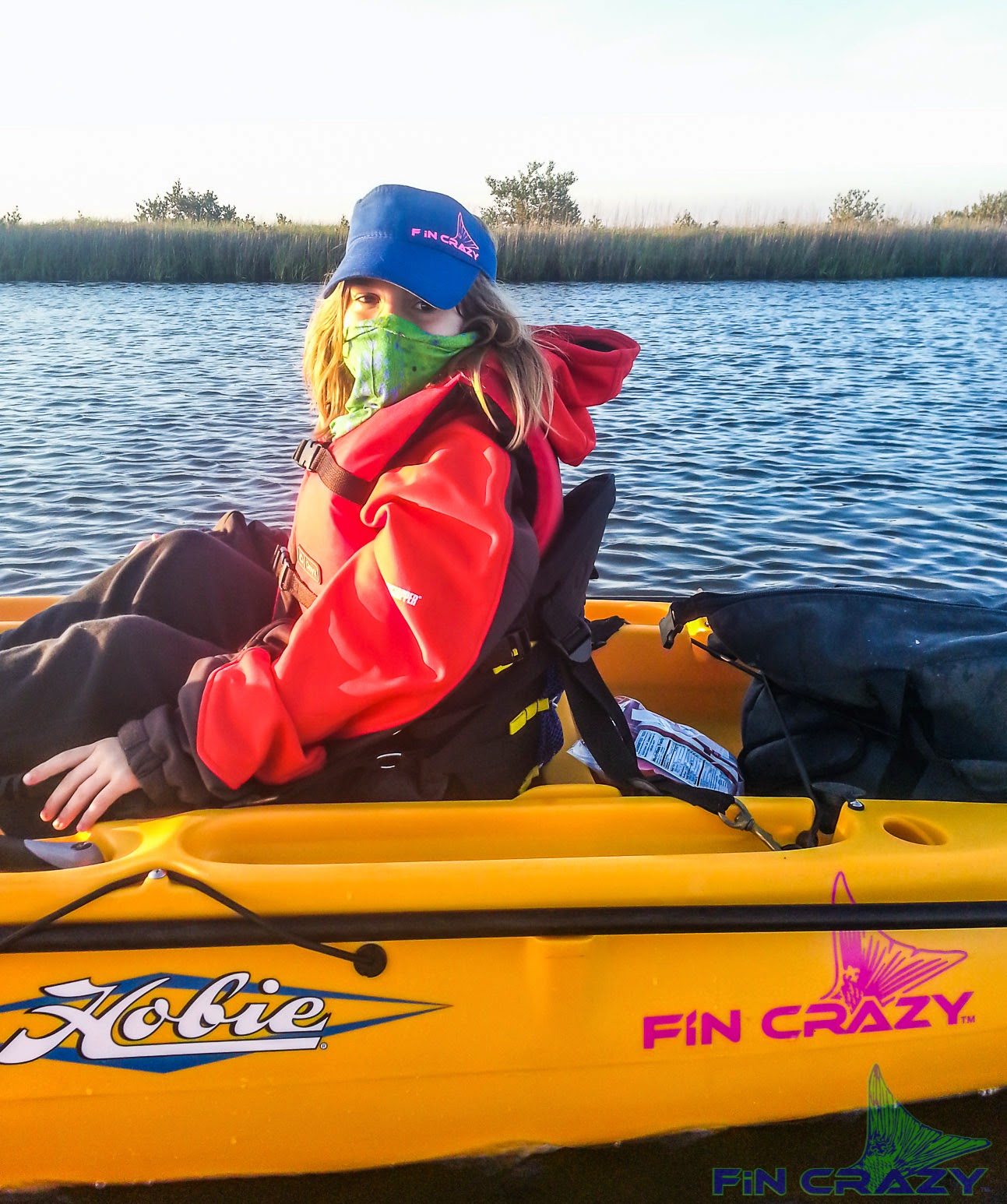 With all of the obstacles that Charlee has endured over the past couple of years, she has never once let Tourette’s conquer who she really is.  She plays sports, makes good grades, loves the outdoors, and isn’t afraid to try new things.  Spending time in the outdoors with Charlee has always been a joy and she continues to amaze me daily with her attachment to wildlife, but this trip was a little different.  Charlee showed a natural focus that I am not sure I have seen in her before, she was in tune with what was going on around her, she made adjustments on her casting like a pro, her lure placement was better than mine at times, and she maneuvered through the twist and turns like she had been there before,  all while maintaining a smile the entire day.  Proud would be an understatement. 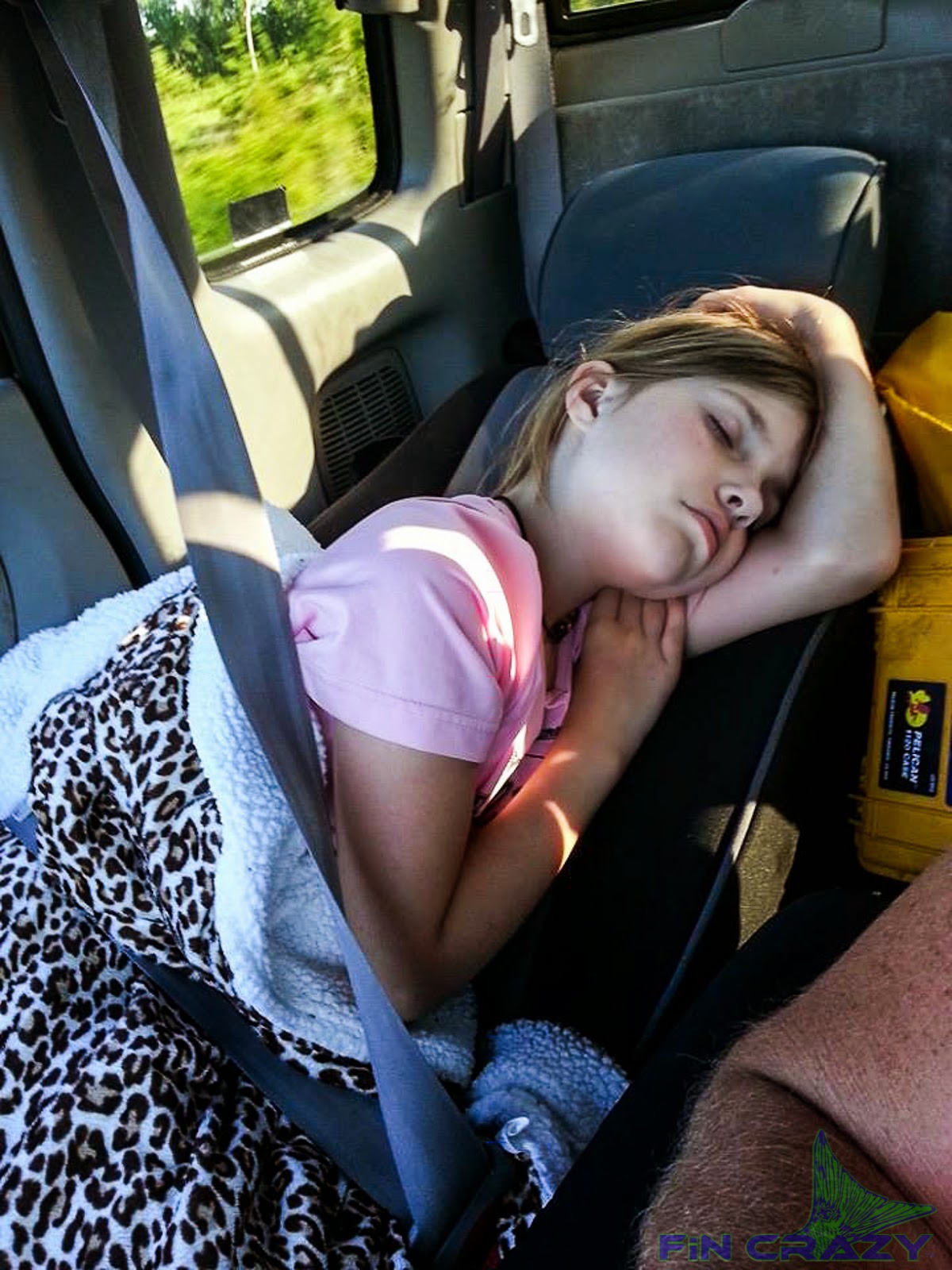 Watching your kids grow up can be challenging at times, and sometimes we get so wrapped up in our own issues that we forget the challenges that our kids face on a daily basis.  To watch your child overcome internal obstacles, like Tourette’s, really sheds a different light on what I consider problems. Watching how Charlee handles herself in different situations has taught me a lot about how to deal with life and life’s’ ignorance’s.  Charlee and I have a saying that we always share with each other when confronted with ignorance, “Just let it Geaux”.  It’s a simple phrase that’s easy to say, but to live it can  be a challenge.  If you take a minute to sit and think about what Charlee goes through on a daily basis you just might understand.  So next time you feel the need to point the finger, or share a negative opinion, or poke fun at someone, or someone shares their ignorance with you…..”Just let it Geaux”.


AND….the next time you’re on the water and you hear a loud mouse squeaking in the distance, don’t worry, it's not the Rookin coming to getchya, its probably just Charlee and me.