Conquering the Storm or Dancing with the Devil... Paddle Palooza 2015 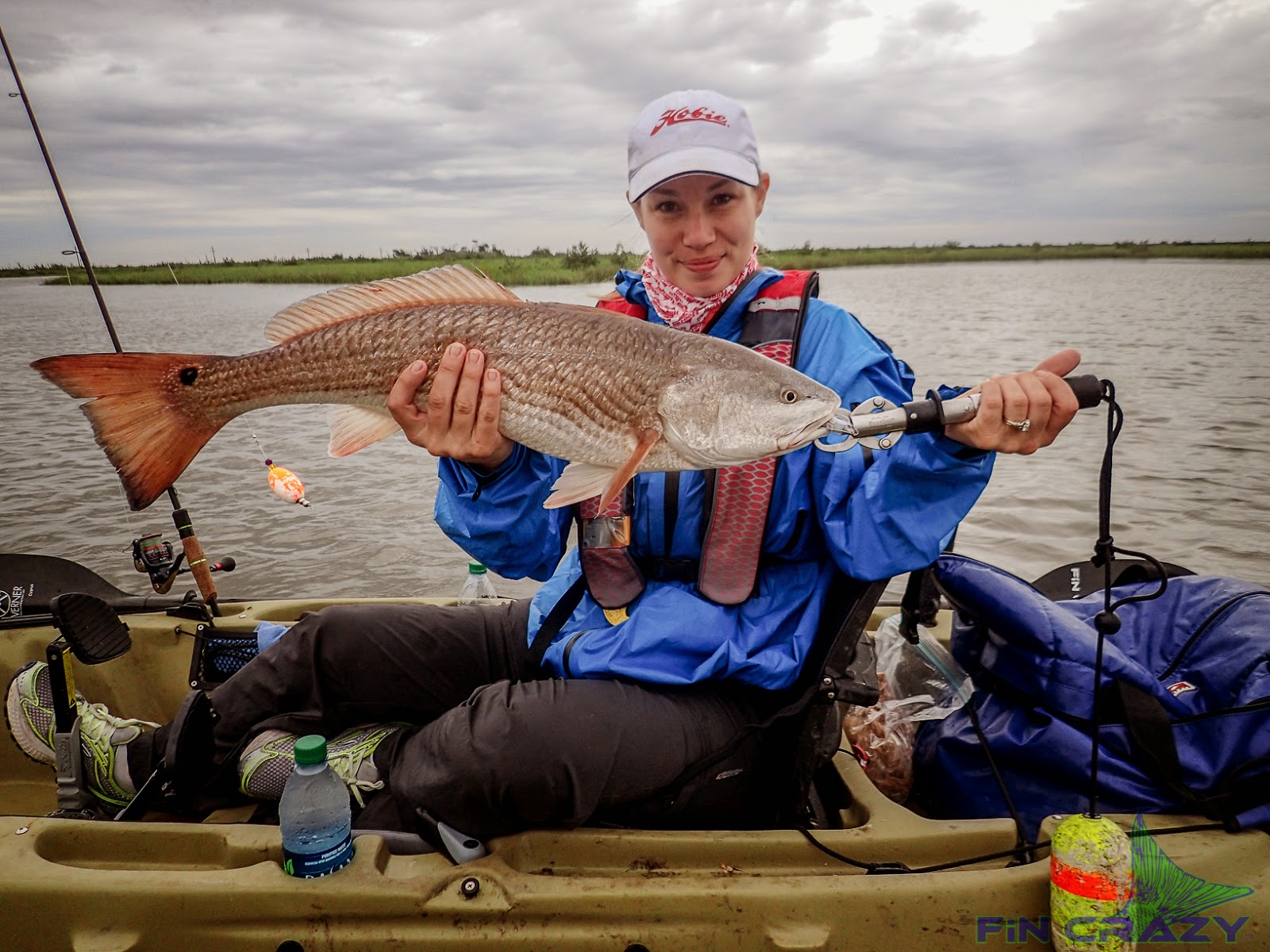 With busy schedules and a commitment to focus on freshwater for 2015, there was definitely a hesitation in preparing for Paddle Palooza XI.  Although my wife, Jennifer, and I had made the agreement nearly a year earlier that we were going to fish this event together, the KBS and KBF Opens had been in full swing over the previous weeks leading up to PPXI, and I was just settling down from traveling to and fishing Kentucky, Alabama, Florida, Texas, and Tennessee.  Needless to say my focus was on large mouths and not specs or reds at all.  But with only a week left before PPXI we revisited the idea, 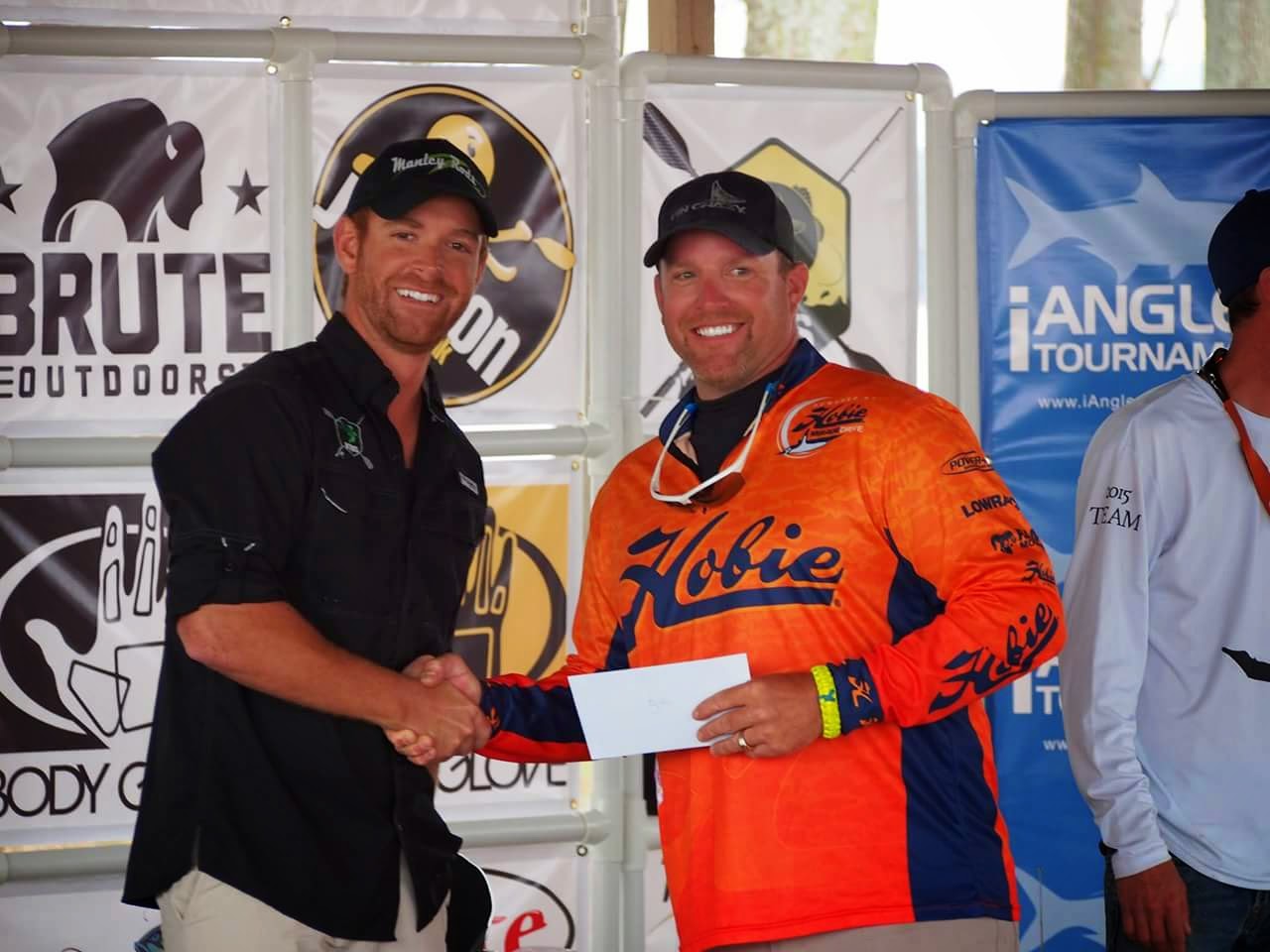 followed through with our reservations, paid our entry fees, and began casting sessions on the back deck over a few cold beers and warm glasses of wine.  And while I gave as much direction as I could about casting direction, distance, and presentation, the biggest teacher of them all turned out to be my 6 year old daughter Payton.  As I have to travel a lot for work, on the nights when I was away, Payton made sure to get momma on track.  She explained the process of flipping the bail, holding the line on the end of your finger, and casting both side armed and over hand.  Payton stepped up like a pro and sat Jennifer down like a student on her first day of school.  I couldn't be more proud of both them for being open minded and knowledgeable enough to teach and learn from each other, especially given the 3 decades of separation between them. 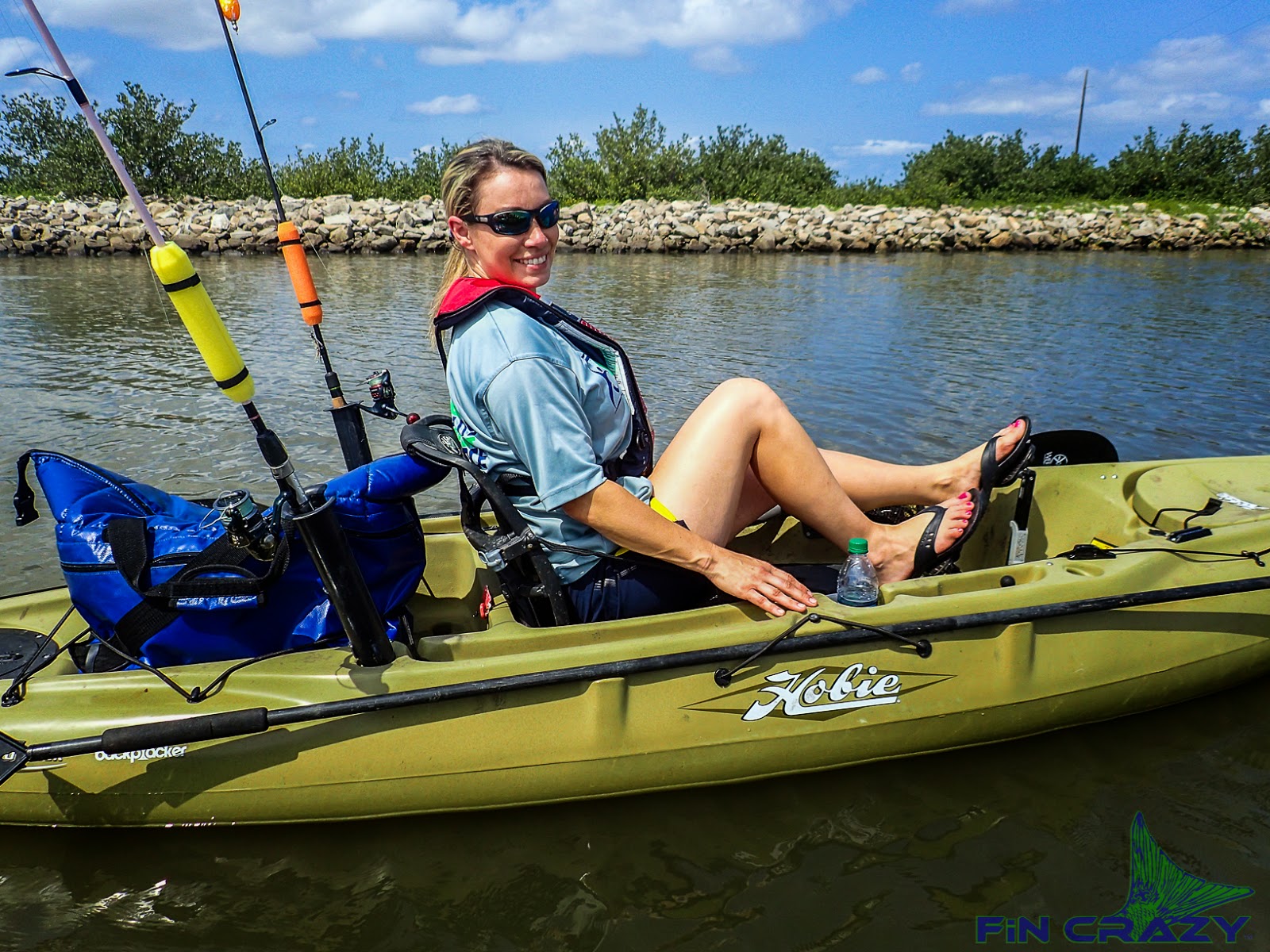 Just to put it all into perspective, Jennifer has only ventured into a kayak once or twice since we have owned them, and has never fished or caught a fish out of a kayak. But with the truck loaded, she was ready.  I could feel the nerves building with every mile of road traveled down toward Grand Isle, La.  It was a strong mix of excitement and nervousness, with a major concern of weighing in.  All Jennifer wanted was to be on the board, she just wanted to weigh a fish.  It didn't matter if she had a tiny fish, fell out of the kayak,  or had to use dead or live bait, she just did not want to come home with a skunk on her back. 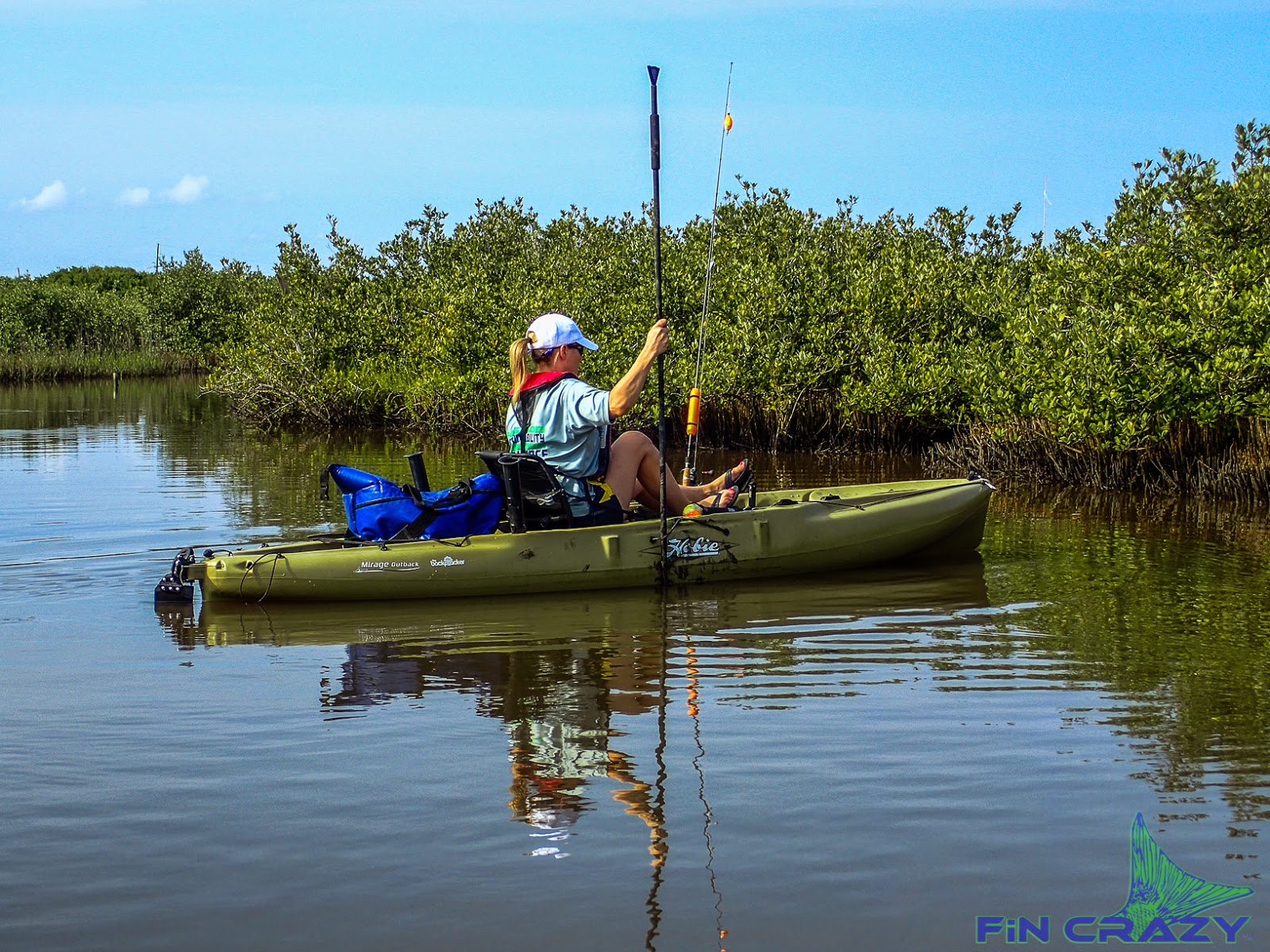 As we arrived with a couple hours left of daylight, I decided we would avoid the planned fishing location and head to Fourchon for some site seeing in the Mangroves, casting practice in real situations, and educating a little around current lines, moving water, and points.  Little did I know that after two turns down the canal we were going to end up in whirlpools spread all over as the depths dropped and currents 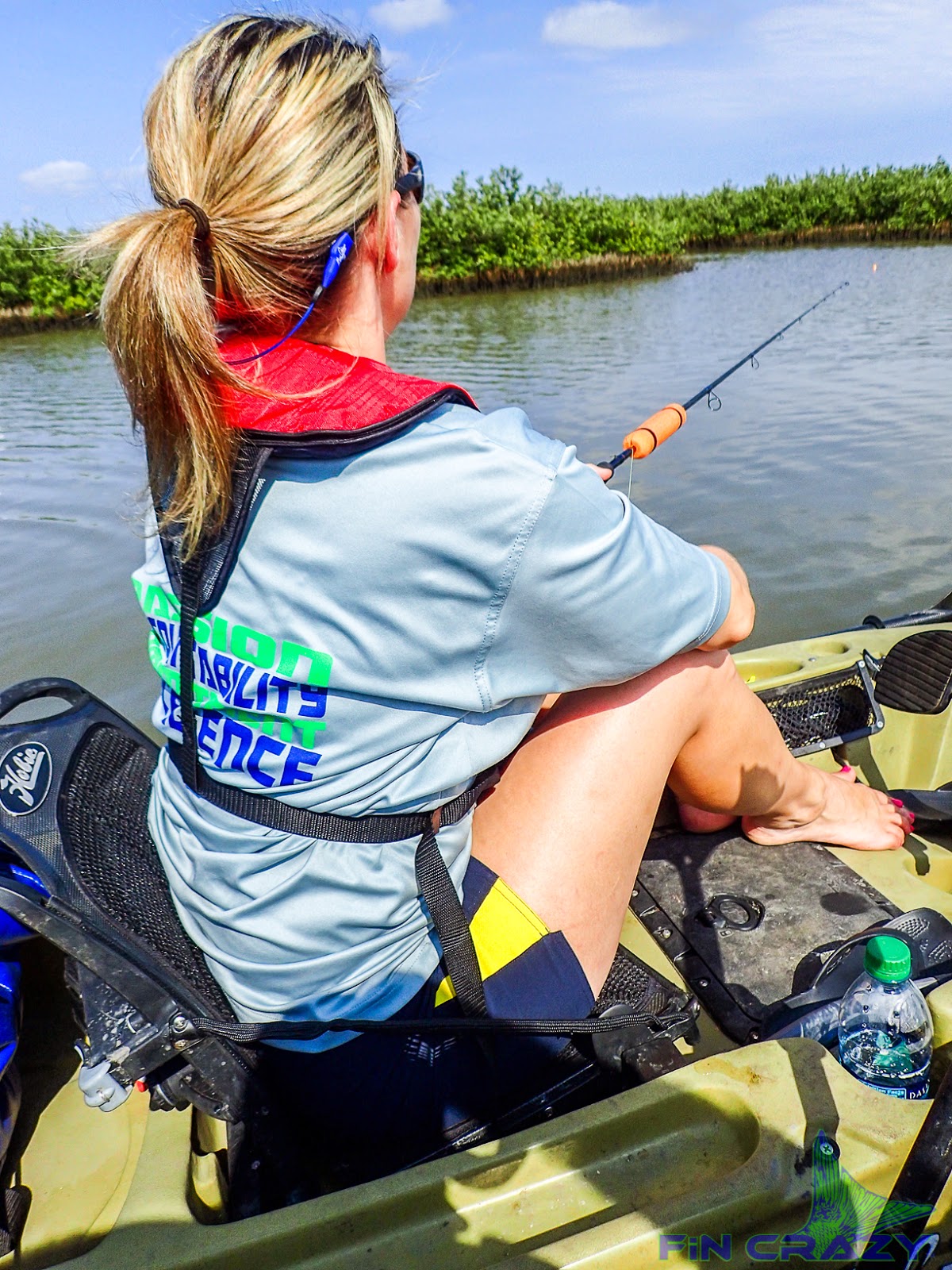 fell at a high rate of speed.  I was actually nervous at one point, but in no way was I going to let Jennifer know that this was not normal. While my goal was to ultimately keep her safe, I needed to tread on the side of caution as to not startle her to the dangers around, but she took to the Hobie Outback like a tornado in a trailer park.  She was bobbing and weaving and pedaling through every obstacle in front and around her like she had done it a thousand times. 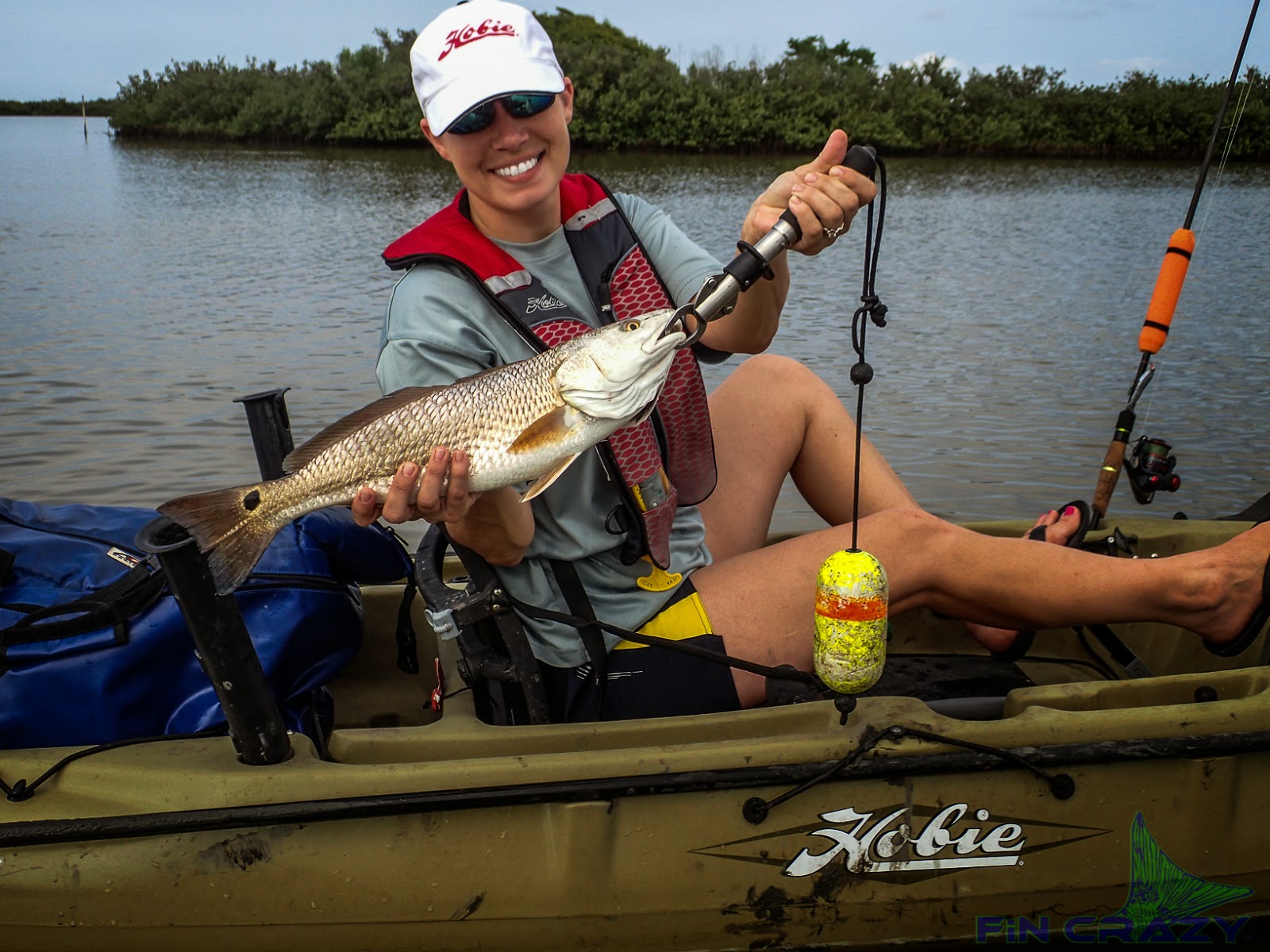 After a solid hour of fishing oyster flats and the water continuing to drop, she looked at a small cut with some water flowing out of it and said, " if I was fish, I'd be over there." I told her to go get it, and after about 10 minutes of beating the water with her gulp and cork, it finally happened.  The cork dropped, the line went tight, and she set the hook like she was shark fishing off the beach.  She even set it 2 or three more times while reeling it in just for safe measures.  It was an exciting moment for both of us.  As we took some pictures, shared a cold drink, and celebrated the joy of her first redfish ever, her first fish in a 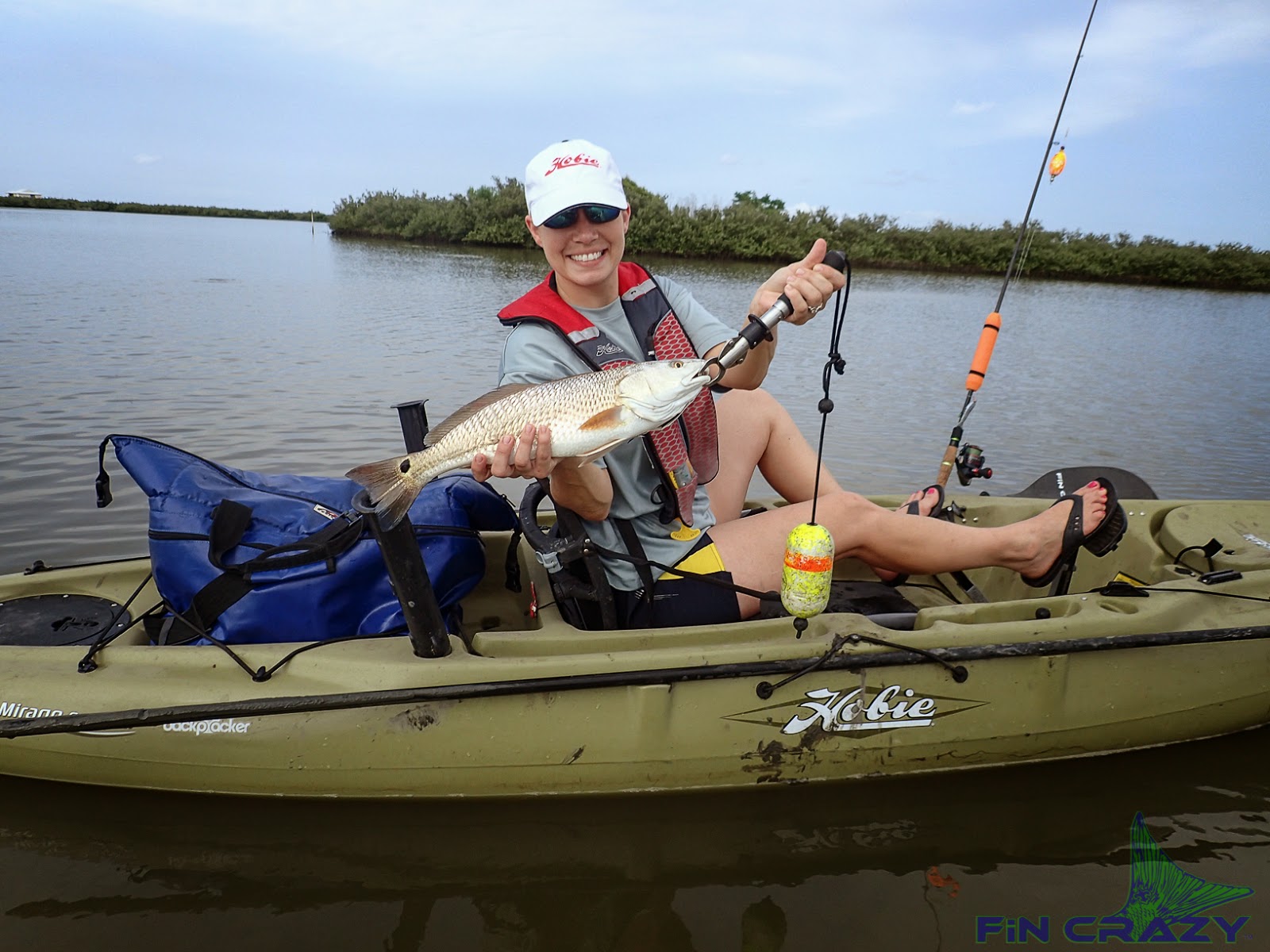 kayak, and her first real kayak fishing experience, we called it a day and headed back to the truck.  I think I sent that pic to more than 50 people within minutes, you would've thought I was celebrating my first born. 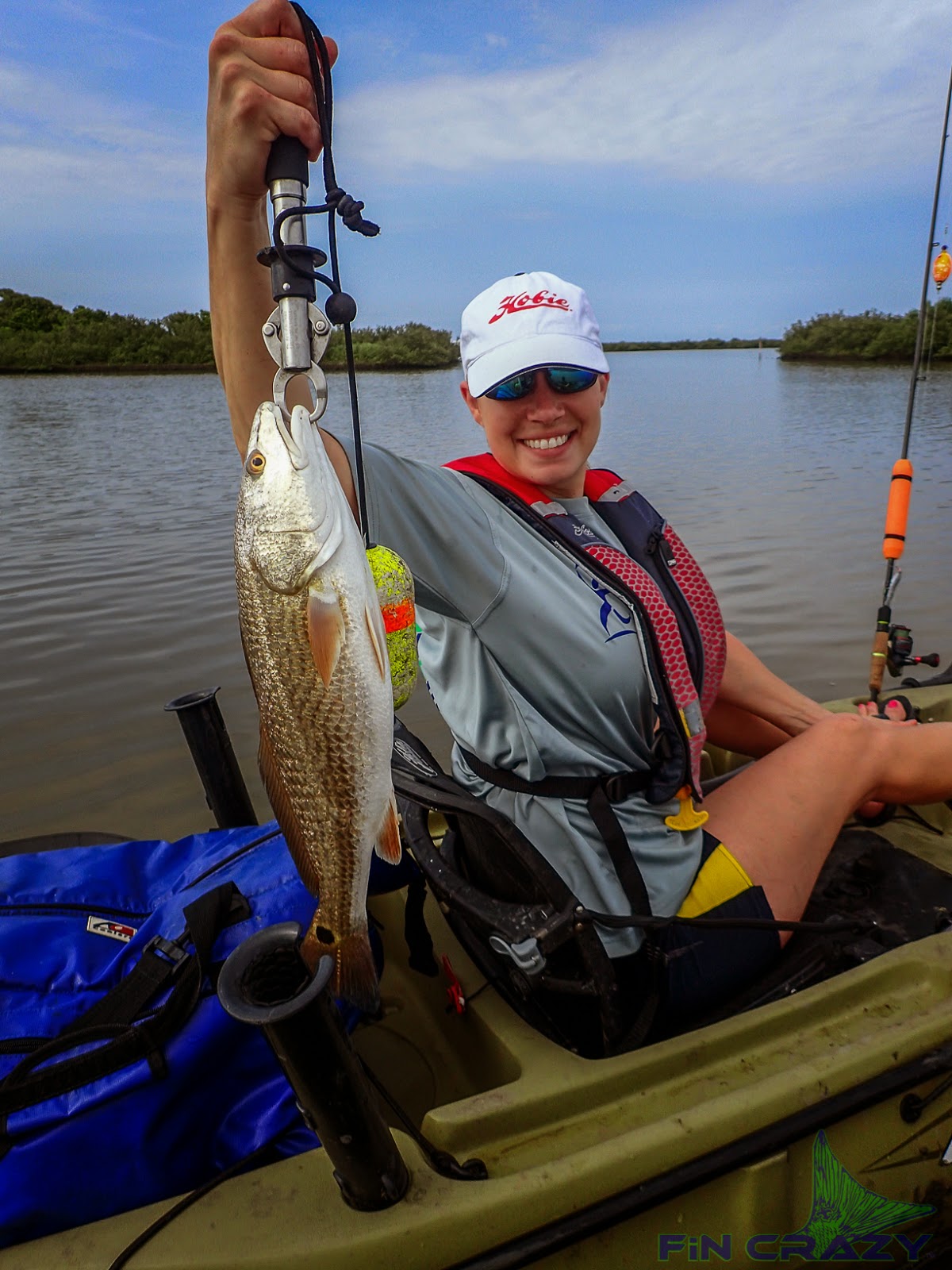 After a few more drinks and the ending of her first captains meeting, we hit the sack.  And with just hours in, the alarm went off and we were rolling to the truck at 3 a.m.  We were tired and excited and ready for action, but the action we got was a just little bit more than what we bargained for.  As we arrived at our first location, it was obvious we weren't going to put in and pedal anywhere.  The lightening was crashing everywhere and the wind was whipping like a long tailed cat surrounded by rocking chairs.  We then moved a little further down the road to attempt to get ready for a little roadside fishing, but as we parked, the truck began to shake and visibility dropped down to Mississippi River clarity after a hurricane.  It was clear that what was going through Jennifer's mind at this point was definitely some thoughts and choice words that wouldn't be politically correct to write in a blog or say in crowd, and with that shared, we decided we had better head to Morans for some hot coffee and breakfast, actually she decided, I just obeyed.
As the major storm bands passed, we decided we still had time to make it down to our backup roadside spot and try our luck just in time for safe time fishing hours.  Unfortunately after unloading the yaks, nosing it in the water, and an hour of fishing, Jennifer didn't get the first strike.
From there we loaded up with our heads hung low, but still optimistic, and headed to spot number one.  As we pedaled up, we saw a large bull red take off right in front of us, and while I suggested fishing a point, Jennifer chose her own direction and went chasing the big red.  After about twenty minutes and a few spec blow ups on topwater on my lure, Jennifer decided to turn back and hit the point.  As she approached it, I was actually reeling in a spec when I heard her yell, I got one, I got one.  As I turned to look at her, she was reeling just as fast as that red was ripping drag, and her Outback looked like it was about to plain off as she experienced her first Cajun sleigh ride.  The red finally carried her right into the grassy point and then turned, by then she had the cork reeled right up the gunnel and as I approached with my mad netting skills,  I proceeded to miss the red with the net, then I hung the net up on a ram ball and as she reeled the beast in for the third time, I then hung the net up on something else on my yak.  The red has now wrapped her line around my mirage drive, and as I pulled the drive and untangled the net for the third time, she was able to surface the red and we got him in the net.  It was 27 and an 8th inches, and while I explained the slot rule again and watched her hopes sink like a one ounce jig head in Bell Pass, I reassured her that with the water being warm, we could definitely shrink the fish to within the legal slot limit. 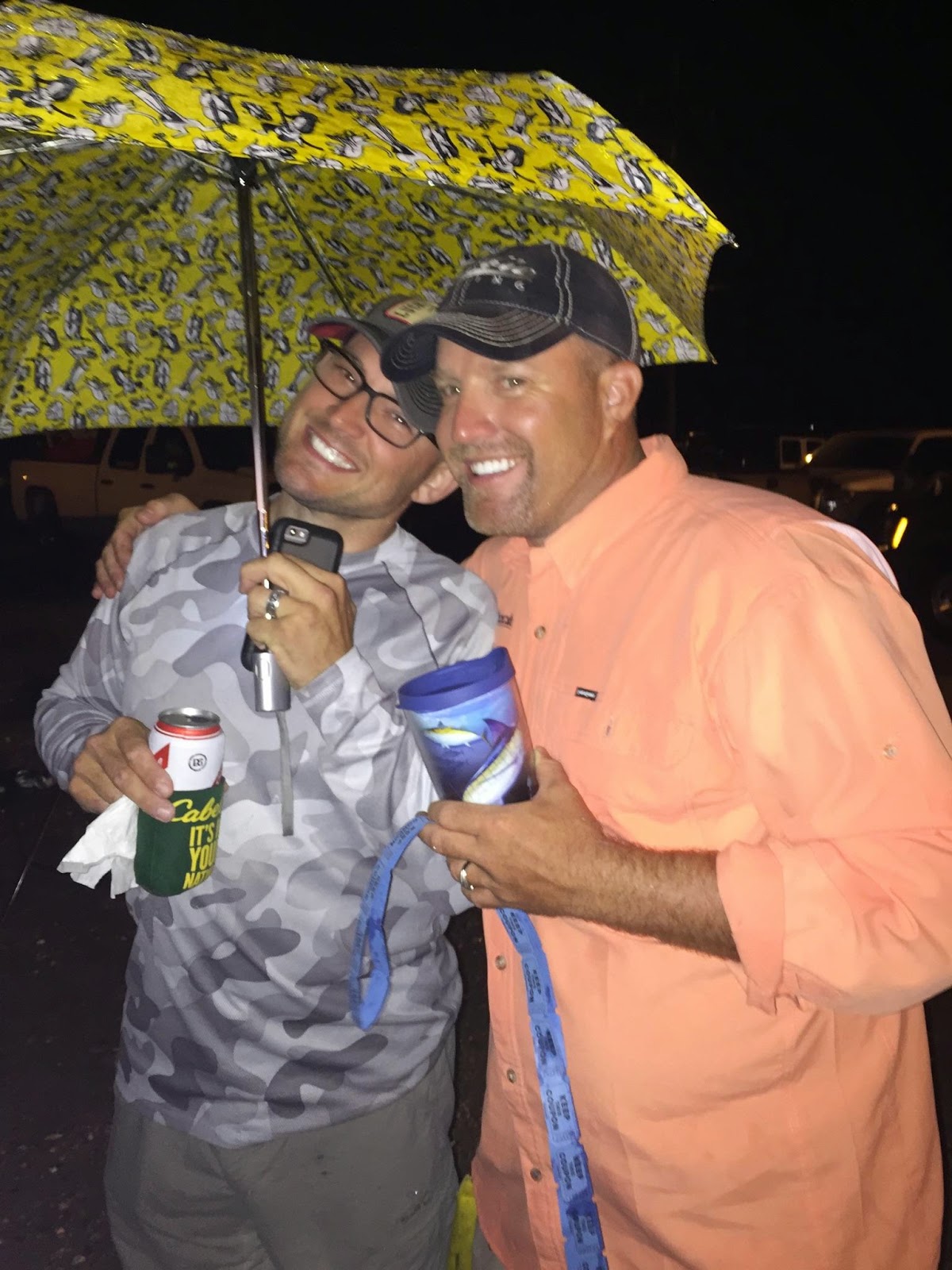 After a few pictures and high fives, we then made about 100 yard pedal right into a school of trout and within 15 minutes of landing her red, she now had a spec in the bag.  I couldn't believe how this horrible day of events had turned into a lifetime of memories within hours.
It was still prior to 9 a.m. and we had a lot of time to focus on flounder as this point.  And to be honest, I was done, I was ready to just turn in and hit the bunks and wait on the weigh in as I was confident she had a red that would definitely put her on the board, and if you remember, her goal wasn't to win, it was not to skunk, and that goal was well achieved.
After about another hour of fishing I kind of hinted to her about my thoughts and she turned toward me with fire in her eyes and said are you crazy, we are not leaving until I catch a flounder.  I wasn't sure if I had created a monster or if the devil had taken over my wife, but what I was sure of was that she no longer had a fear of not catching anything, she wanted to win, and it was obvious.

We spent the next several hours avoiding lightening storms, launching the kayaks in four other locations, fishing from the side the road, fishing off the bridges, fishing between the bridges, venturing into where flounder usually lie, and searching for new flounder water, but with all efforts exhausted and my strength dwindling from loading, unloading, loading, and then unloading again and again, hunger had finally set in enough for Jennifer to say, "lets go eat."  Well after splitting a roast beef poboy at Tydes, and her apparent energy replaced, she looked at the time and said we still had an hour and that she wanted to go back out.  Well who am I to argue with the women that has officially put a stomping on me during tournament hours.  We ventured over to the public Leeville launch and proceeded to fish for another 45 minutes before we had to load up yet again and head to the weigh in.

At the weigh in her spirits were high, we were convinced she might win the ladies division and also place in the largest redfish category.  And 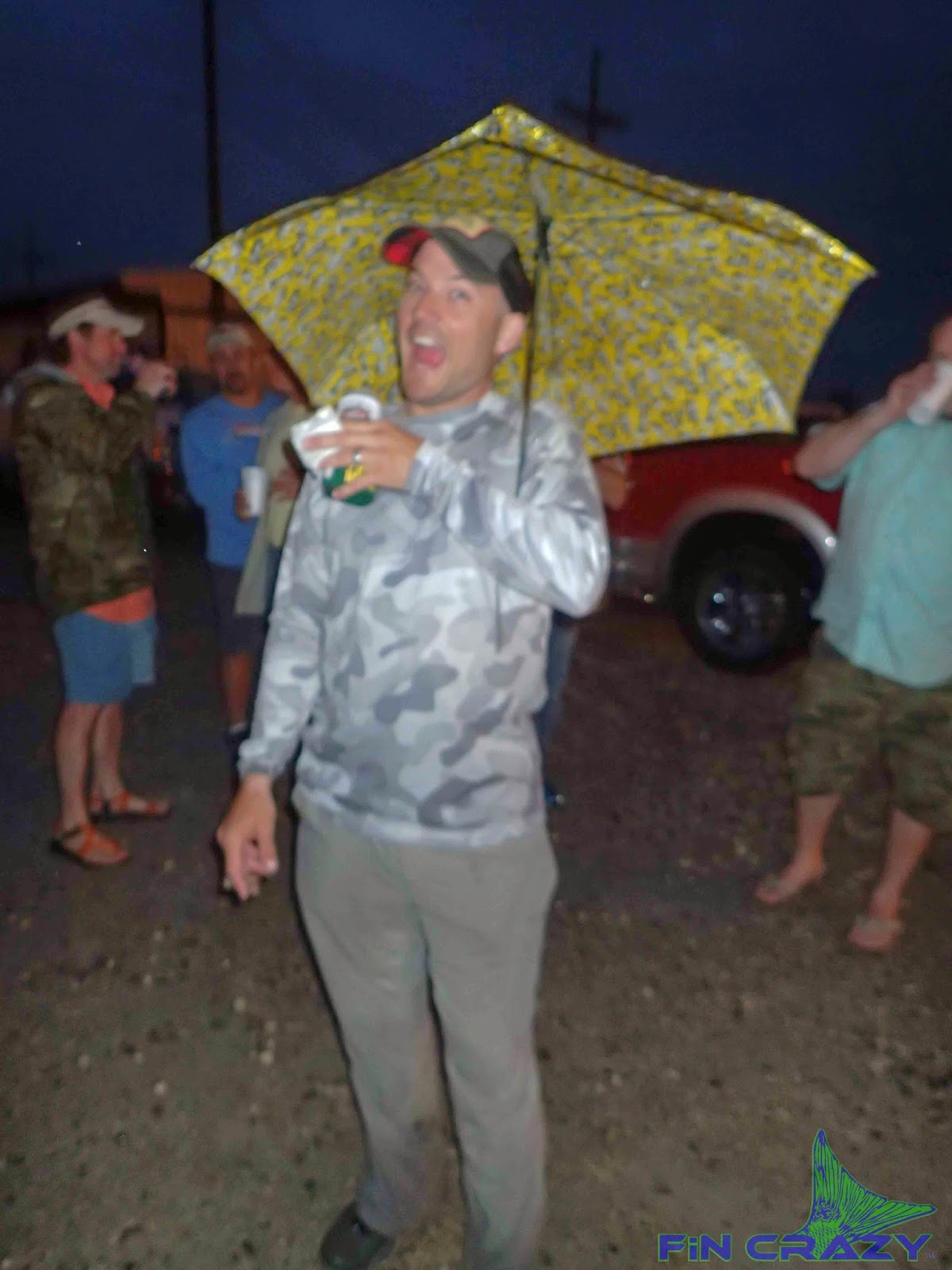 while the pounds were unveiled we quickly learned that ounces mattered.  Jennifer ended up finishing 2nd in the ladies division, and 3rd overall largest redfish out of 287 anglers of both men and women.
It was an experience like no other, she experienced highs and lows all day long.  The high of her first tournament, the lows of frightening storms and wind shaking the truck, the high of a giant red, the low of it being to big, the high of speckled trout in the bag, the low of not finding a flounder, the high of thinking she won the ladies division, the low of realizing ounces matter, and then the final high of walking up on stage and accepting her

Cabela's gift card and her first plaque ever for third largest redfish in her first tournament.  It was great to see her bounce back constantly throughout the day and watch that competitive spirit overcome everything that was thrown at her, and most of all it was exciting for me that she was able to experience the true raw emotions that take place in competitive fishing events.  It was an experience I know she will never forget and will always appreciate, and I couldn't be more proud of my wife and best friend for opening up a new world that we can both enjoy for years to come.  We will see everyone at Fall N Tide 2015.

Posted by Unknown at 7:18 PM No comments: