Making a Transition from Fresh to Salt, Pro Style 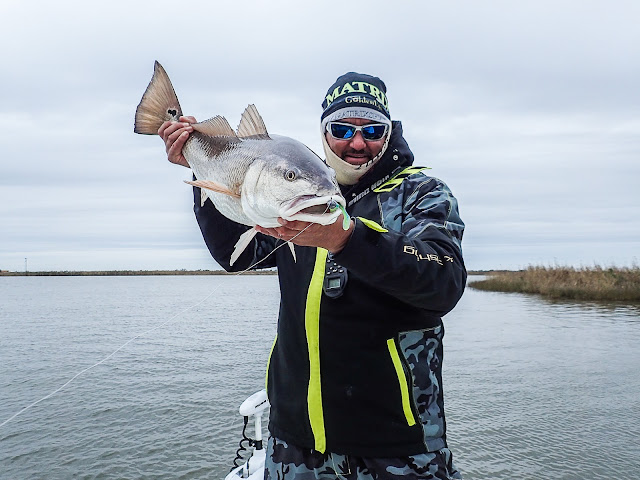 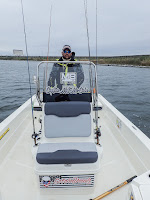 Ever sat in front of the TV and watched professional bass anglers go at it on the water, their attention to detail and the speed at which they make decisions is amazing.  As they scan their depth finders and study the ground contours, water depths and temperatures, they quickly put together a game plan and go to work.  With a dozen rods neatly placed on the deck, endless amounts of tackle stacked and organized in compartments throughout the boat leaving them thousands of options to comb through every second, their minds are racing through a constant checklist of the next lure to try, the next stump to 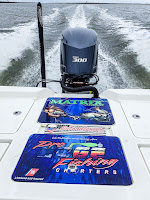 attack, color changes, weight changes, line changes, the options are endless.  While some people watch these shows and fool themselves into thinking that they too would catch big fish if they were fishing exclusive bodies of water, another group of viewers think, man, if I could have one day on the water with a pro, I would ask questions about every cast, bait choice, target choice, and anything else they think might possibly give them an edge up on the fish and on surrounding anglers. 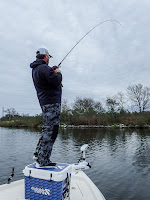 Well this month I got to put all of those questions to rest when I had a ride along with a local professional.   Captain Matt McCabe of Pro Edge Fishing is a local saltwater charter captain that specializes in chasing speckled trout throughout the Lake Pontchartrain and surrounding areas, but what a lot of people don’t know about Matt is that he spent 12 years on the pro bass fishing circuits competing in the Bass Master Southern and Central open divisions.  Matt’s knowledge of the saltwater was limited growing up as his focus was always on the prized largemouth bass, but since leaving the tour in 2009, Matt quickly turned his education to speckled trout and that turn has earned him a successful charter business.  What Matt may have lacked in youthful trout knowledge was outweighed by his attention to detail and desire to be successful. 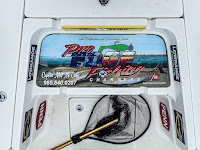 Our trip started well before the sun even considered waking up, as we rolled out of Southshore Bait and Marina, the 300 Yamaha was purring and just waiting for the throttle to hammer down and push the 24 foot Skeeter on its way.  As a cold front had just rolled through and the temperatures plummeted nearly 20 degrees and the wind was blowing a solid 20 knots, I knew the day was going to be a tough one, but in the back of my mind, I knew I was with a captain that had endured these types of fronts in the past.  Finally the hammer fell and we were off through the darkness and up the intercostal waterway to battle the elements and conquer Mother Nature.  On a cold New Year’s Eve day, I originally thought we were going to fish the “great wall”, but as we passed under the famed “green Monster” I knew we were going into unchartered waters for me.  As Matt eased up on the horses and the Skeeter began to come off plane, he was constantly glued to his depth finder, not his GPS, but his sonar.  He quickly pointed out we were in 40 feet of water and to watch the bottom as it was going to gradually come up.  At the point of about 30 feet he shut down the engine, dropped the trolling motor and gave me a play by play of what the bottom contour was going to do.  As he walked me through the play by play I was constantly glued to the screen, until he mentioned that we could start fishing.   He followed that up with, “we can catch a few fish here, but where they really sit is about 150 yards up where a small cut out of the ledge is sitting.”  I looked at the shoreline and the rocks nearby, but nothing to my eyes could explain a cut out in the ledge.  Matt didn’t know exactly what created the missing section of the ledge, but he knew where it was and he knew there would be fish there.  As we worked the drop off and the deeper flat above jigging Matrix shad on 3/8 and ½ oz jig heads boating a few fish here and there we approached the “spot”.  Matt turned and said, “Watch this,” and with his next cast boated a nice trout that went between 3 & 4 lbs.  He was right, he knew where they would be stacked up, and as we drifted over and around the area, it was clear as daylight on the sonar, it was one of those things you just wouldn’t come across if you’re not familiar with your electronics. 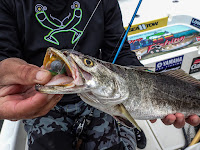 Electronics is one of Matt’s greatest assets; he is a big believer that in deep water and waters with any type of contour or cover underneath, that your electronics can help result in either filling the box or just covering the bottom of it.  Matt uses a Lowrance touch screen model because their system is user friendly and their commands stay the same from one unit to the next, but taking his knowledge of sonar use from his bass fishing days over into the saltwater arena has really allowed him to learn things that a lot of other anglers just overlook.  Matt can actually run his trolling motor until he finds the fish on his Lowrance, turn the boat around, choose a lure weight that falls to his specifics, and count it down until it’s sitting face to face with a speckled trout, and while some people that are not knowledgeable on sonar units may not believe this, I actually witnessed it.  It can be done, and Matt can do it. 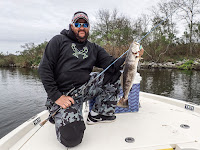 Matt is a big believer in fluorocarbon line and if you need convincing he is happy to oblige.  Matt landed 4 trout in the boat before I landed one.  I knew he was a flouro guy and so am I, the only difference was he uses pure flouro and I use a flouro 7 foot leader mated to braid, well needless to say after being shown up for nearly an hour, I decided to start using one of his rods that was spooled with straight flouro.  We actually did a little test prior to my hard headed transition and it turns out that my lure was falling several seconds behind his lure, we chalked that up to the buoyant properties of braid vs sinking flouro.  These are the little subtleties that many don’t ever grab hold too, and that’s just one of the advantages to getting into the boat with not just a charter captain, but with one that’s spent a decade competing for a living; this guy knows the little things that make a huge difference. 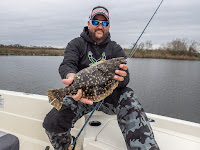 After a few spots and the temperatures and wind continuing to drop we decided to call it a day, after all it was New Year’s Eve and we both had plans.  Given the conditions and the amount of fish in the box it was more than a good day, it was a great one.  Captain Matt is a true professional in both knowledge and people skills, he does what he does to make others happy and he has a great time doing it.  It’s not every day you find someone that loves his job, but when you’re with Matt; it’s obvious he’s one of the few. 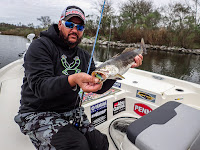 Q&A
What’s your favorite way to fish?
Drop shot, I learned it on Smith Mountain Lake in Georgia and it’s landed me more bass than I can count.  Bringing the drop shot into trout fishing has really allowed my clients an exciting way to fish without watching a cork.


What was your biggest challenge transitioning from Bass Fishing for a living to Saltwater fishing for a living?
Learning the tidal ranges, figuring out when and where to be on falling tides and rising tides in different areas of the lake


Who was your biggest influencer or mentor when you transitioned to trout fishing?
Chas Champagne was a big mentor for years, he was an educator and a friend that really helped me move forward learning speckled trout habits. 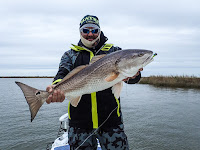 Who is your mentor now?
Mike Gallo of Angling Adventures of Louisiana, Mike has been a teacher, a coach, and a business professor.  He has taught me all about the saltwater industry and the business side of it all. I am not sure I would have grown to where I am today without Mike in my corner.


What’s the best part of being a Charter Captain?
The kids, it’s all about the kids.  Getting a kid on the boat and teaching him about more than just video games and seeing them smile holding up their fish is just a pure joy to me. I take part in a lot of charities and kid events because it’s the kids of today that are going to stand up for all of us tomorrow.


Do you still have sponsors that carried over from your bass fishing days to your chartering?
Well, Dockside marine is my greatest supporter, but I am also on the pro teams for Skeeter, Yamaha, and Seatow. I support a lot of products like Matrix Shad and Boss Outdoors, I stick with companies whose products I believe in and actually use. 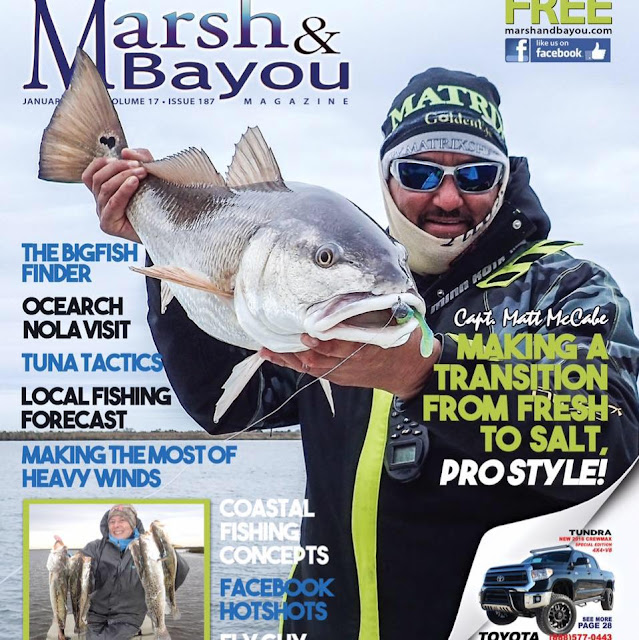