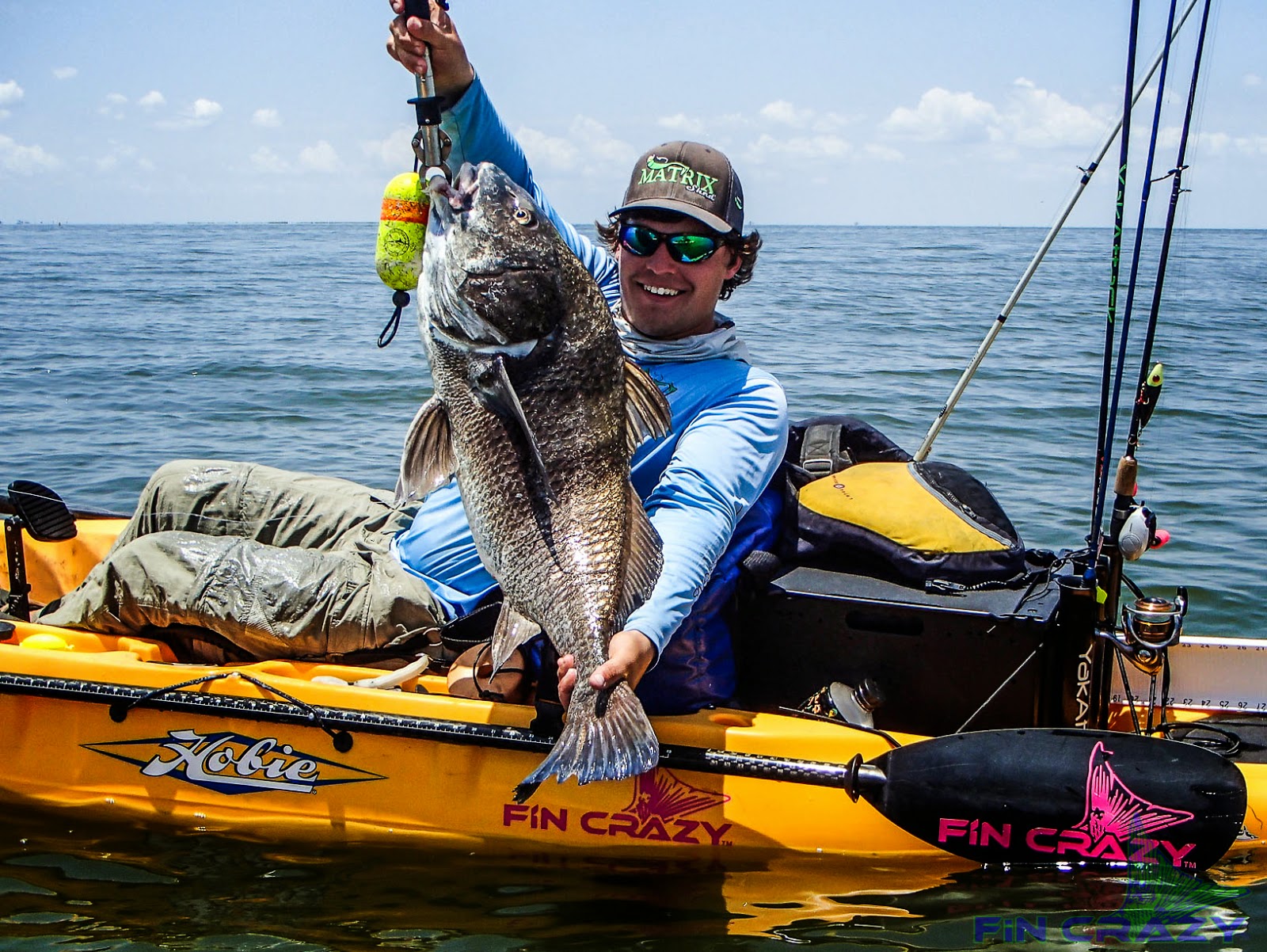 With all of the reports surrounding SE Louisiana of fresh and dirty water everywhere, as a result of the continued West winds and rain filled days, I decided it was time to get out and explore some new grounds with hopes of finding clear and salty water.  That being said, I rarely explore new grounds alone, so I reached out to Ty Hibbs to see if he was interested in making a long trek in new waters, I could hear his excitement on the phone. 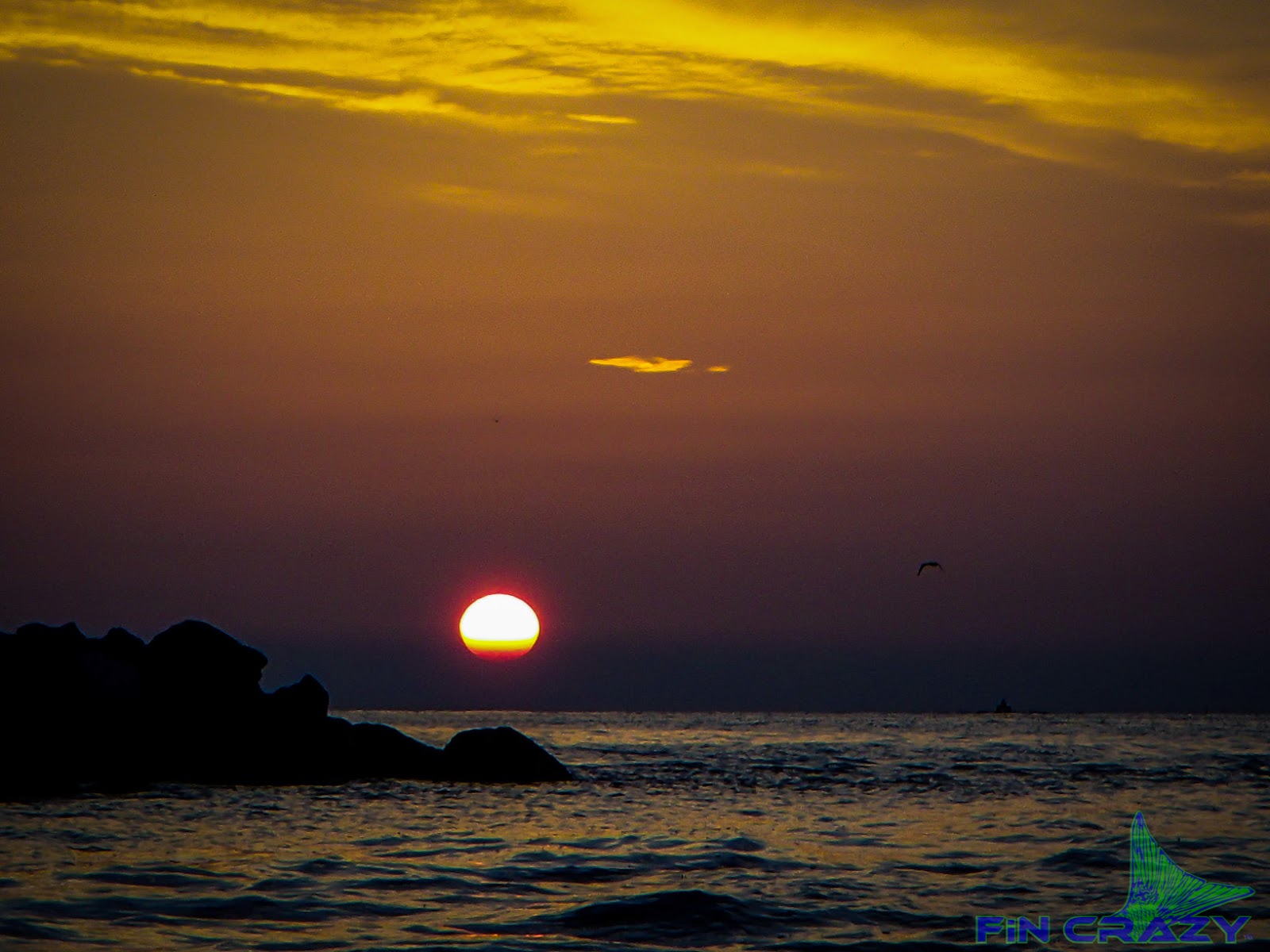 With Ty in agreement on the plan of a 20 plus mile day, I had to leave my house around 1:30 a.m. so we could arrive and paddle through the darkness to what I had hoped would be a day of new beginnings.
Apparently though, Ty's alarm clock didn't get the memo, so after umpteen text and several phone calls, Mr. Ty "sleepy Head" Hibbs showed up at our meeting point, about an hour late might I add.  With us loaded up, we headed south to Grand Isle.
As we arrived it was still dark, and we had to hurry if we were going to make the run in time to get to our destination for an early morning topwater bite.  With the incoming tide and the north winds, peddling the two

Outback's weren't as fast as what I was hoping, and before we had made it a quarter of the way, the sun was breaking above the horizon. 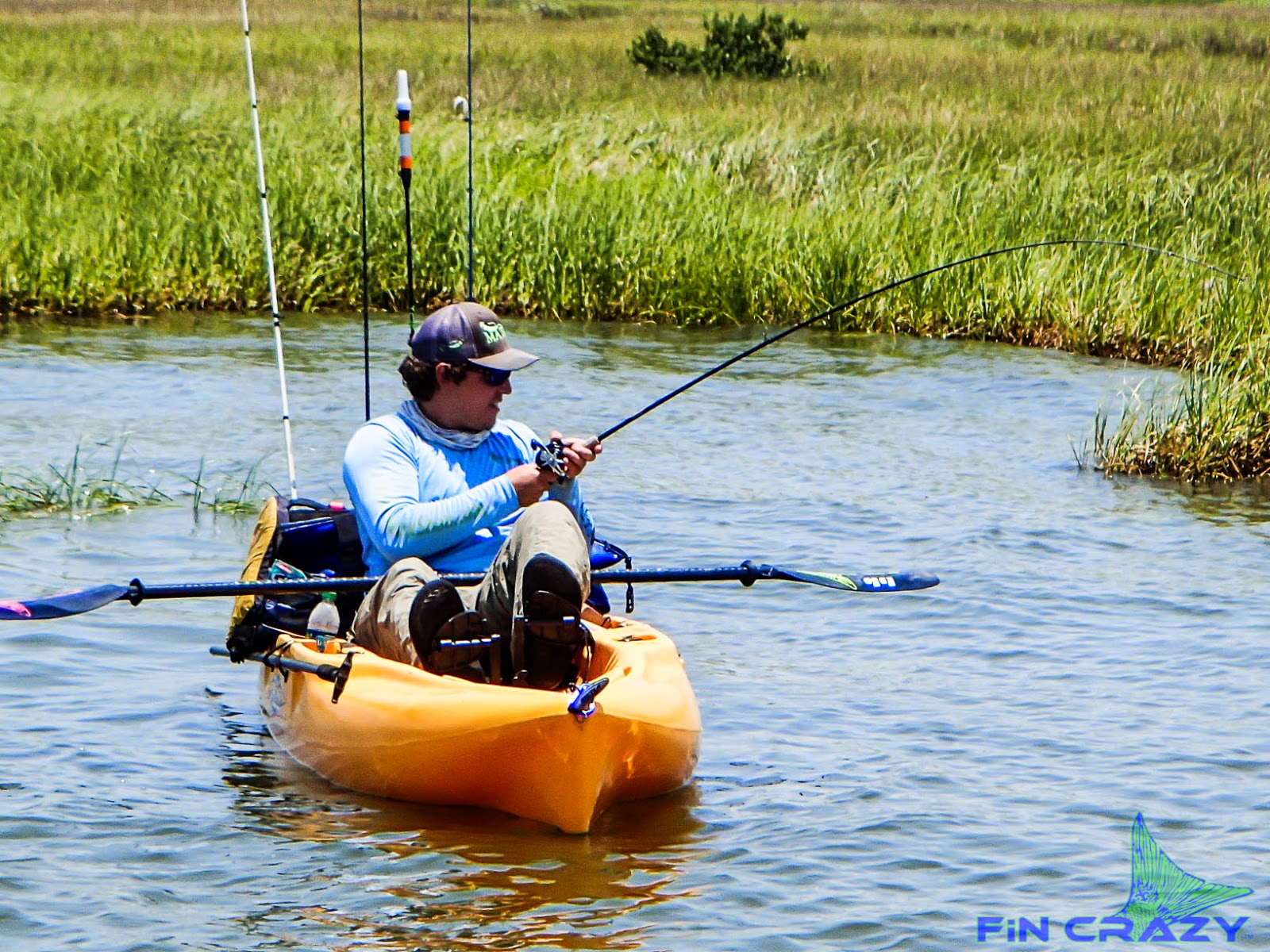 As we altered our plans due to the sun starting to come up, we quickly turned course to hit an old hot spot, but unfortunately there was a 24 foot boat anchored up on top the structure I was hoping we would be able to get started on.  From there we took a mile long run slinging lures in every direction with no luck.  The sun was now up, I continued to run through my topwater arsenal as Mr. Sleepy Head continued his jigging and topwater. And then it happened.  A flock of birds showed up about 400 yards away and Ty turned his bow and headed for them, while I chose to stay closer to moving water.  Within minutes, I had a trout in the yak, it wasn't big, but it was a trout.  Next cast, another, and another and another.
I kept wanting to call Ty and tell him to come back, but my phone wasn't working for some reason, and better than that,, every time I looked, his rod was bent over fighting fish.

The water was green clear, the water temp was 86 degrees, we were sitting on the near end of a rising tide, the dolphins where everywhere, the birds were everywhere, the wind was out of the north, shrimp were jumping from one side of my yak across the hatch and in the water on the opposite side without ever touching the kayak, and as long as you threw a lure that sunk fast, you caught trout.  Eventually Ty made his way back to me, we continued to fish within two hundred yards of each and sat there anchored in the tide.  By 10 a.m. I had tagged and released more fish than I did in all of 2013.  I tagged 43 trout before I finally ran out of tags, and I had a bag full of  trout on ice.  Most of the tagged and released trout ranged from 8-12.5" and I didn't keep one that was below 13" with the largest easily surpassing the 20" mark.  Before we left the area, we had both landed over and around 100 specs each, it was a day I wish I had my kids or wife with me.

I was using matrix shad in every color they made, but the Kamikaze seemed to produce more consistently, and I could only catch them on a 3/8 ounce jig head, I tried a quarter ounce time and time again, but apparently they only wanted a fast falling bait.  Mr. Sleepy Head was throwing the same, but at times he was throwing a double rigged, 3/8 and 1/4 ounce headed matrix shad and was bringing in two at a time. 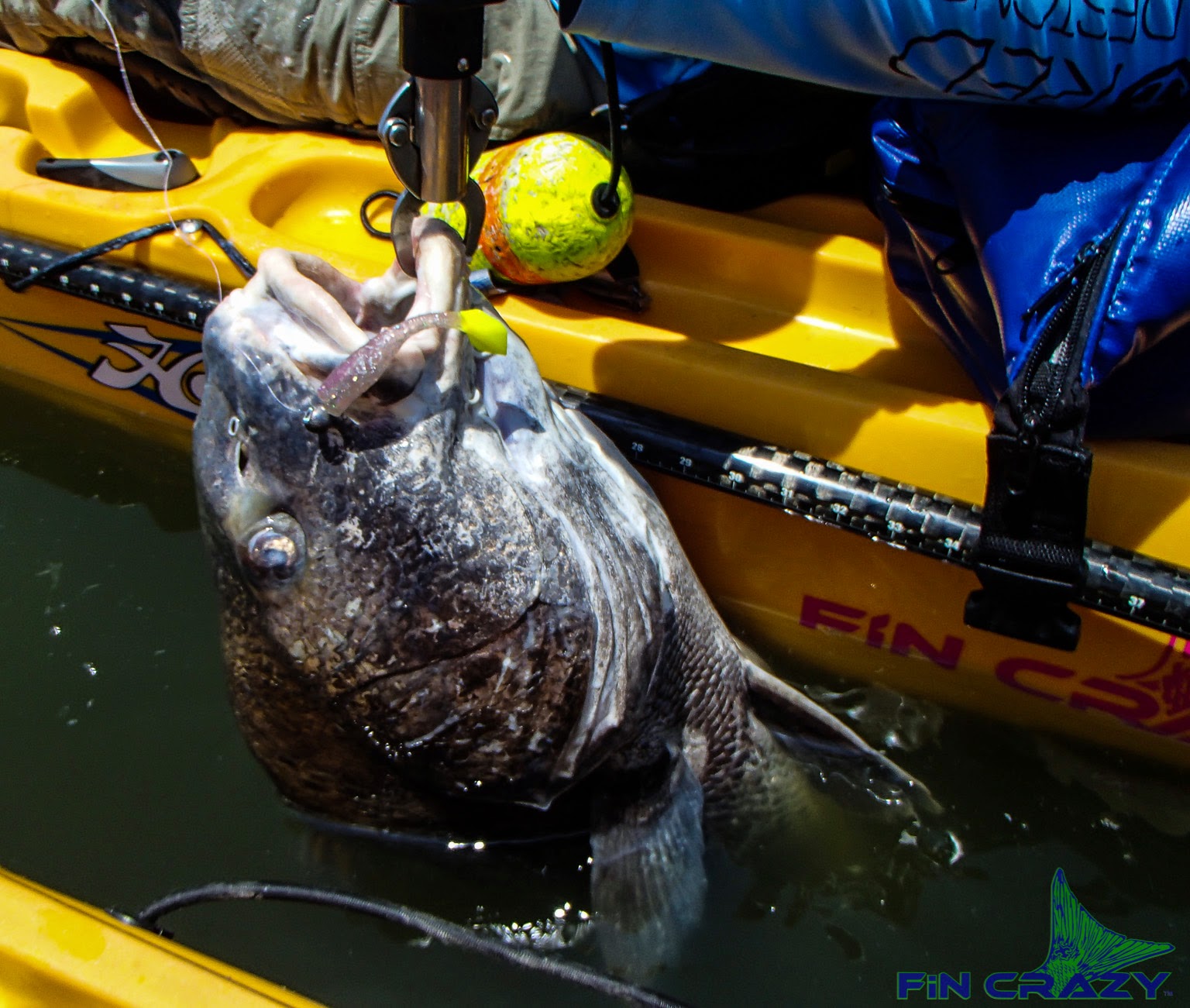 With comfortable winds, and the tide stopping we decided to move another three miles in an attempt to find some reds and flounder.  At this point, we could have gone home having a perfect day, one rat red, more trout than we could handle, and not a catfish in site.  As we made the run and entered into some skinny waters, Ty yelled, "Watch this," and then he dropped his line off the side of the grass and within a second set the hook.  The next thirty minutes or so became comical.  Ty had just hooked in to a giant Black Drum using his rod lined with 14 lbs monofilament.  I have never seen a "big nasty" with this type of endurance, he pulled Ty what seemed like a half mile, from the tiny canal deep in the marsh to more open water where he could then roam free.  Finally after several failed netting attempts, by yours truly, Ty was able to get the beast yak side and bottom out the Boga grips.

I've been asked several times since this trip, where did you fish, and to give a definitive answer,

the best I can say is Grand Isle.  We fished the south side, the north side, in the marsh, in open bays, and beyond.  The one thing that mattered no matter where we stopped or where we launched was clean moving water.  Sometimes we had to paddle a couple miles, sometimes we had to pull over land, or get back deep into the marsh to find it, but when we did, the fishing was hot.  It may sound like a lot, but we only ended up paddling just over 10 miles.  Our original plans would have netted us well over 20 miles, so I guess the alarm clock fail helped us out in the long run.  One thing I do know, is that I got to explore areas of Grand Isle I have never been too, and likely would have overlooked had we been on time.

High tide was around 10 a.m., the winds shifted from north to southwest around 10:30 to 11:30, tidal range was around 1.2 feet, and water clarity was an easy 3-4 feet when we found clean water.  Very few fish caught on topwater, but the ones that were, made the bag.  Nothing caught under a cork, although we didn't try it much, Matrix and Vortex Shad without a doubt owned the day. 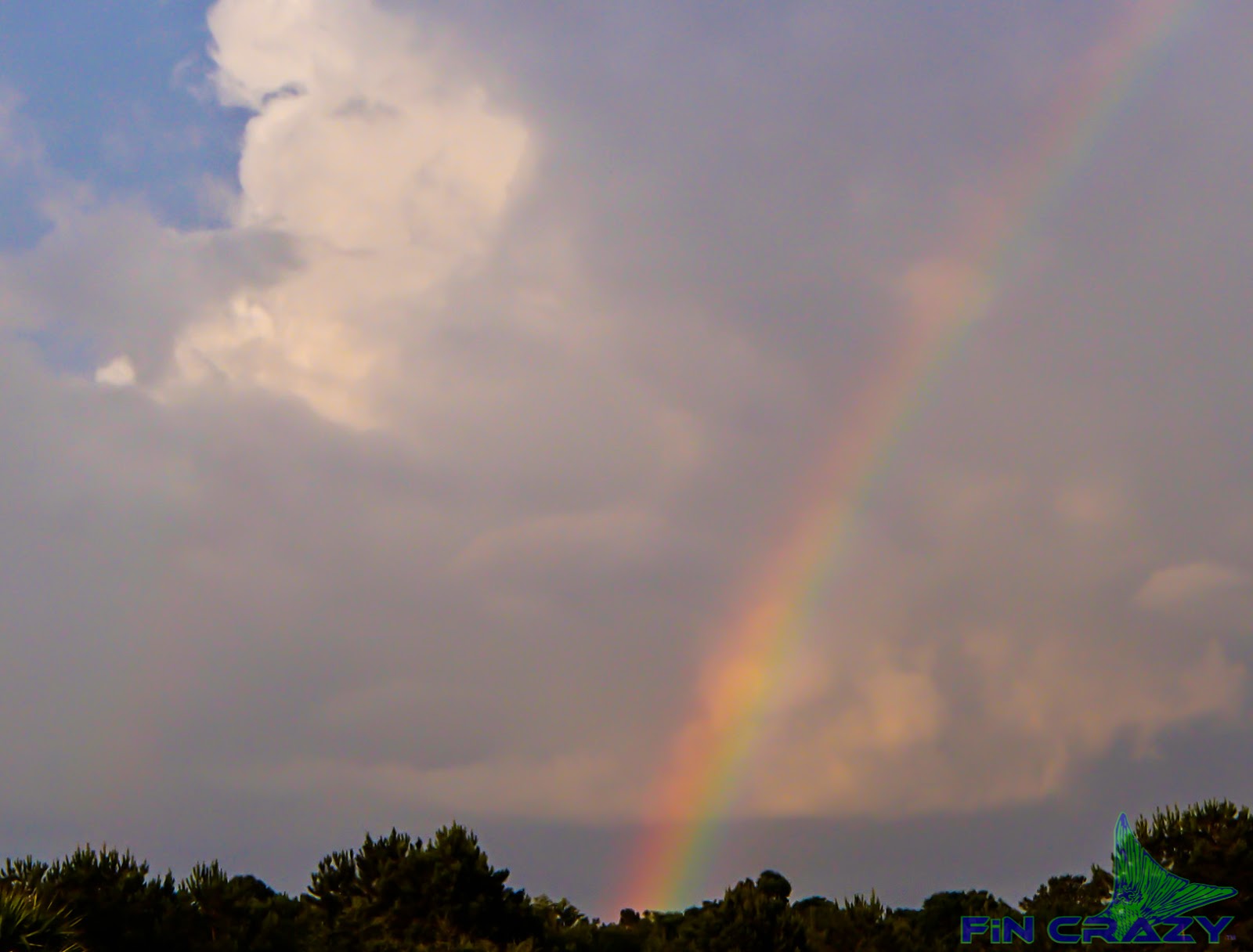 Leaving at dark and getting home early is always nice, but arriving home to a rainbow sitting over a true pot of gold, my family, made for a memorable ending.

Until Next Time,
Stay Safe & Catch1
Posted by Unknown at 8:45 AM