Sunday Funday in the Fog with Putt Putt 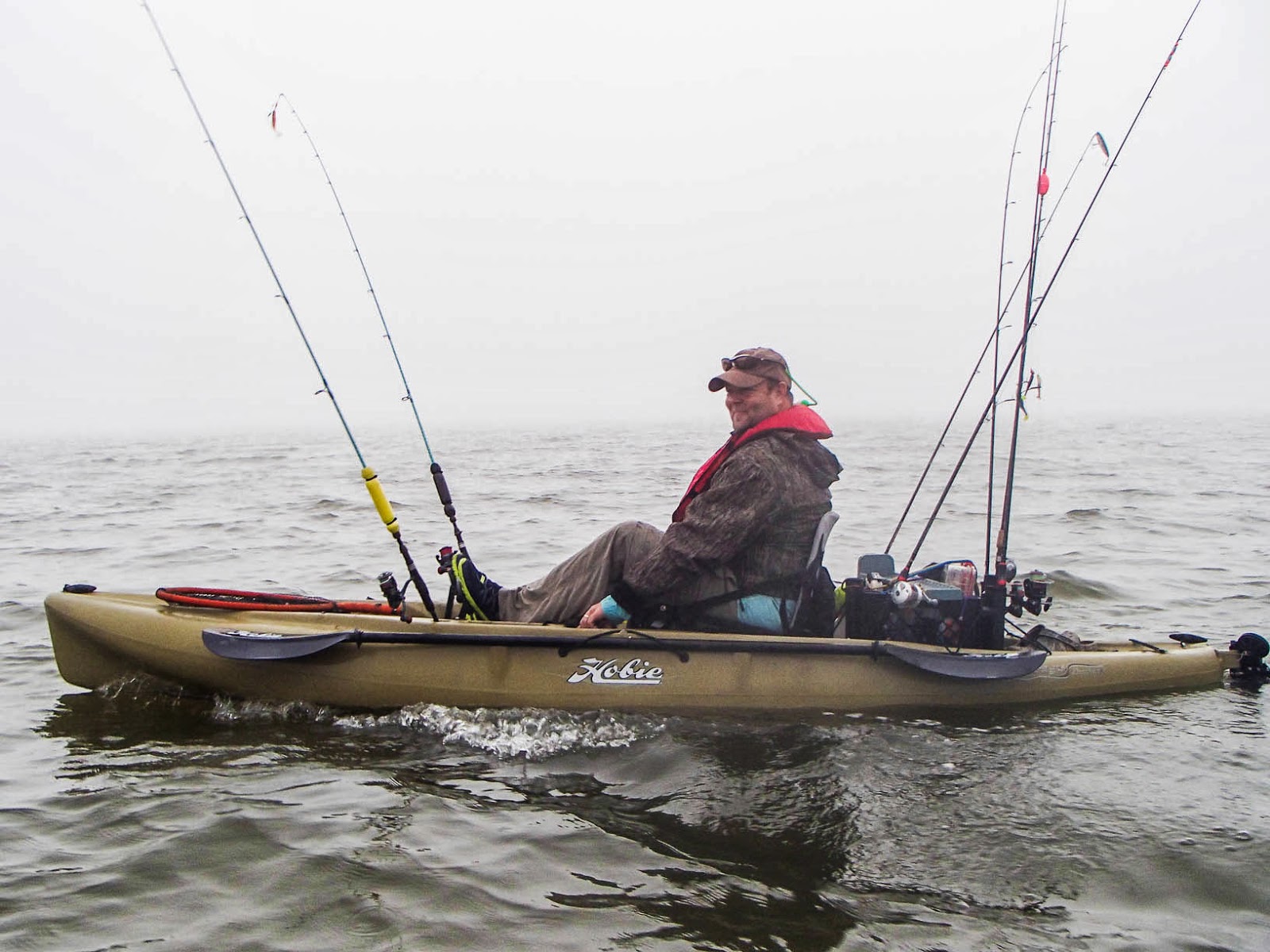 Needing to get a little pre-fishing in for next weekends team tournament I decided to make a last minute trip.  It was late Saturday night and I only knew one person that was already loaded up from fishing Saturday morning and would likely jump on the opportunity to go search some new waters with me on Sunday.  I picked up the phone and sent a text, and as expected, Torrey Harris responded.... I will see you at 4a.m.
This was my first time fishing with Torrey, so we had to get used to each others style to say the least, it was a tortoise and the hare type scenario. 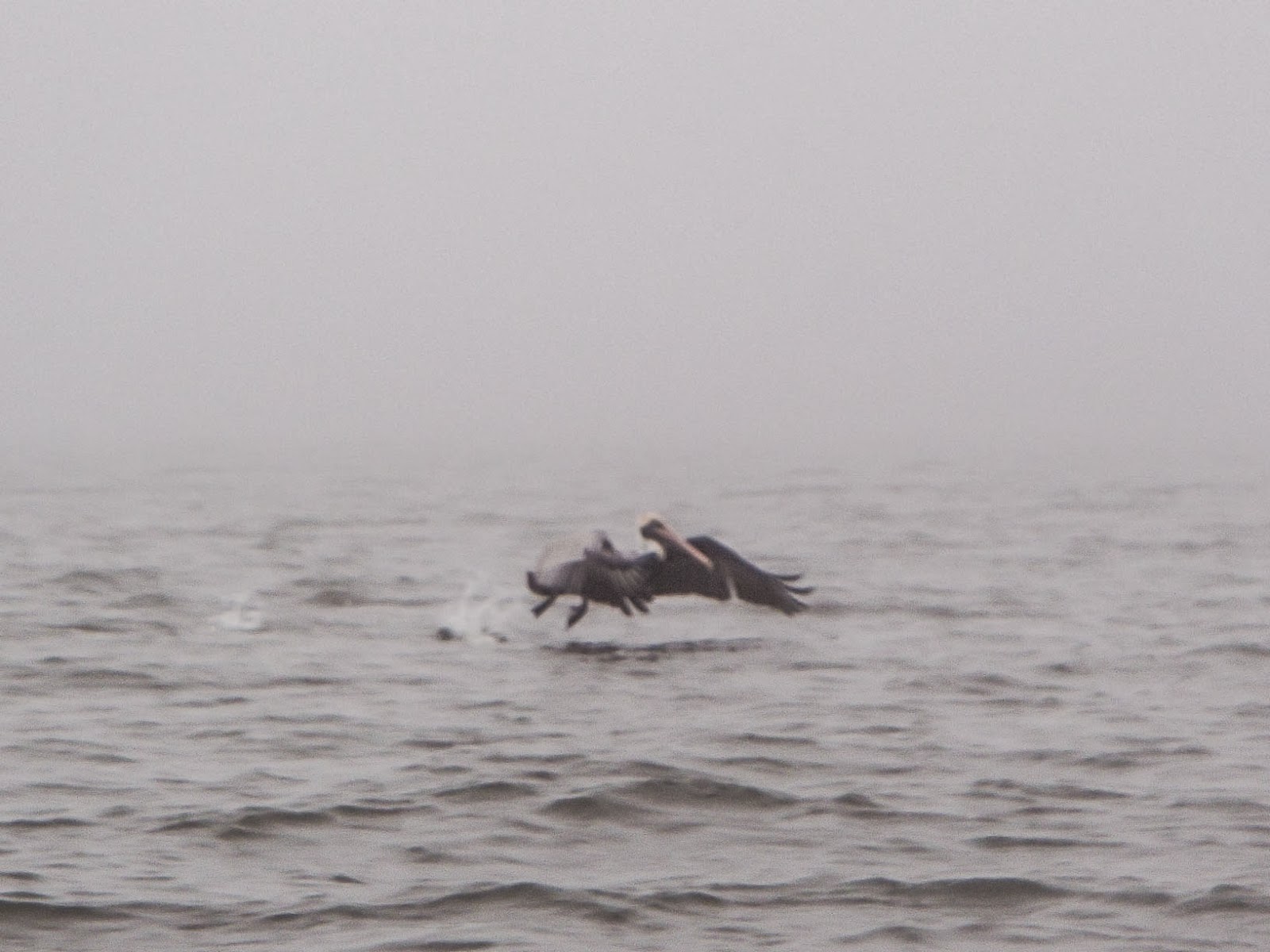 When pre-fishing I like to fish fast, a stick and move type tactic that has always served me well, and Torrey on the other hand, likes to take his time and soak in the view and watch the ducks circling round the ponds looking for a place to land.
With that being said Torrey Harris' new nick name is Putt Putt, just like the miniature golf game, and because the fog was so thick, I couldn't fish my normal pace or I would have lost ole Putt Putt in the clouds that were hovering among us. It was so thick at times I couldn't see my lure land in front of me, and losing my exploration partner was the last thing I wanted to do.
We got on the water around 6:30 am and the water temperatures ranged from 58 degrees to 60 degrees the entire day with the air ranging from the 40s when we left home to 68 when we were done, we didn't get a glimmer of sunshine on the water or on the ride home. 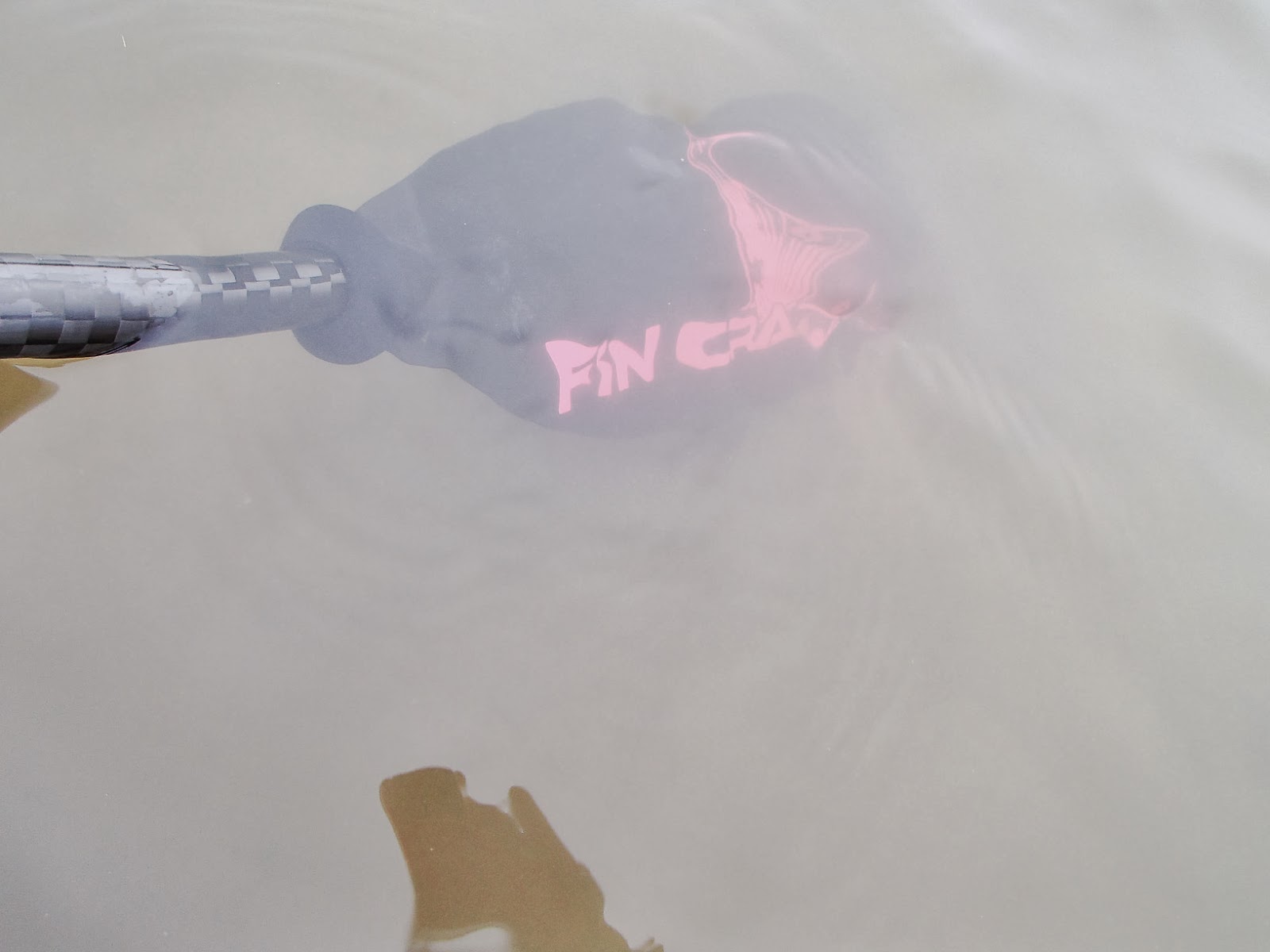 The one thing we did find was clear water, at least clear enough considering the area we were in.  At times you could see 3 feet down, but because the fog was so thick with a lack of sunshine, site fishing was challenging to say the least.  This trip was all about finding upper slot redfish, and when I mean find, I mean visually find.  When it comes to red fishing slot fish, I am a site caster, I can sometimes push pole and paddle an hour or more without casting a line, chasing bulls on the other hand is a different story, and todays conditions made site fishing next to impossible.

Being I could see great in the water, but not far ahead of me, I knew if I was to see a redfish It would be within 15 feet of my Hobie, so I opted to put my Fly rod within reach, rather than a normal jig or spoon on a baitcaster, that way I could just reach out and place the lure quietly and easily in front of the fish.

Easier said than done, the first fish I rolled up on was like I had written it down the night before.  I was push poling quietly, my mirage drive was out, my fly rod was in my belt holder, and I was ready, then I see him, a solid 26 inch 6-8 lbs red just sitting there hovering, not swimming, but hovering about 8 feet from my yak, as I grabbed my fly rod out of the holder, I began to spin the park n pole around to put it in the rod holder, as I've done hundreds of times, and BAM, I slammed the side of the yak with it and in that split second the fish was gone.

The next red I eased up on was so close I couldn't even grab my rod before he was gone.  This string of luck  continued until I decided it was time to go check out another area.
I started playing Marco Polo with ole Putt Putt until we were able to find each other through the thickness of the fog.  I explained to him that I had a honey hole about a mile and a half away and I thought we should make the venture so we could at least go home without being skunked.

After battling the fog, lots of mud, shallow water, and short cuts that turned into long cuts, we arrived to our location.
It was almost 10:30 now and the fog had set in even thicker, I knew there was no way we were going to be able to site fish the area with any success at all. 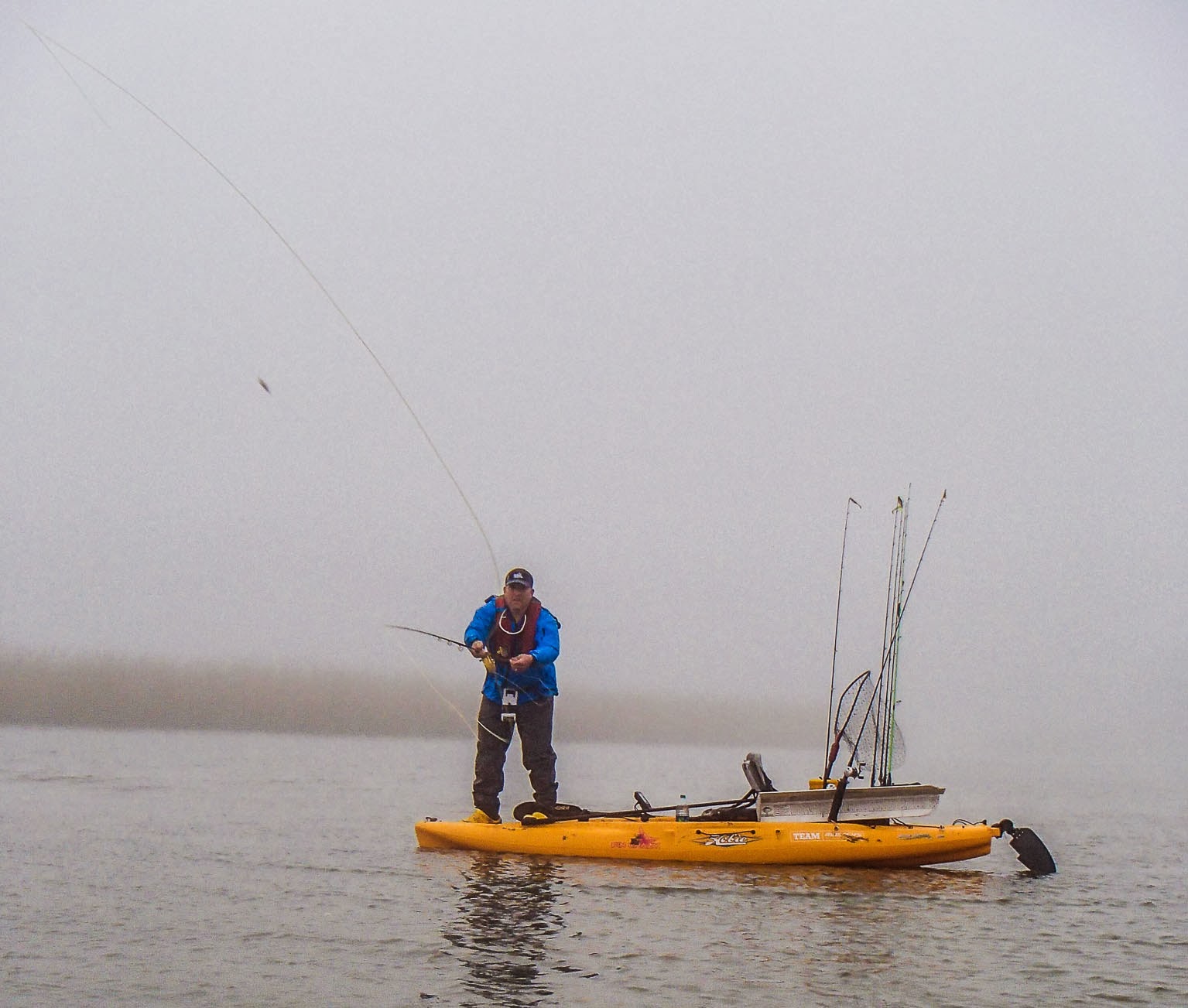 With that in mind, we hit the area with an extreme low level of confidence, I threw everything I had tied on, I even spent a while stripping line and slinging flies trying to entice something, but nothing was interested. 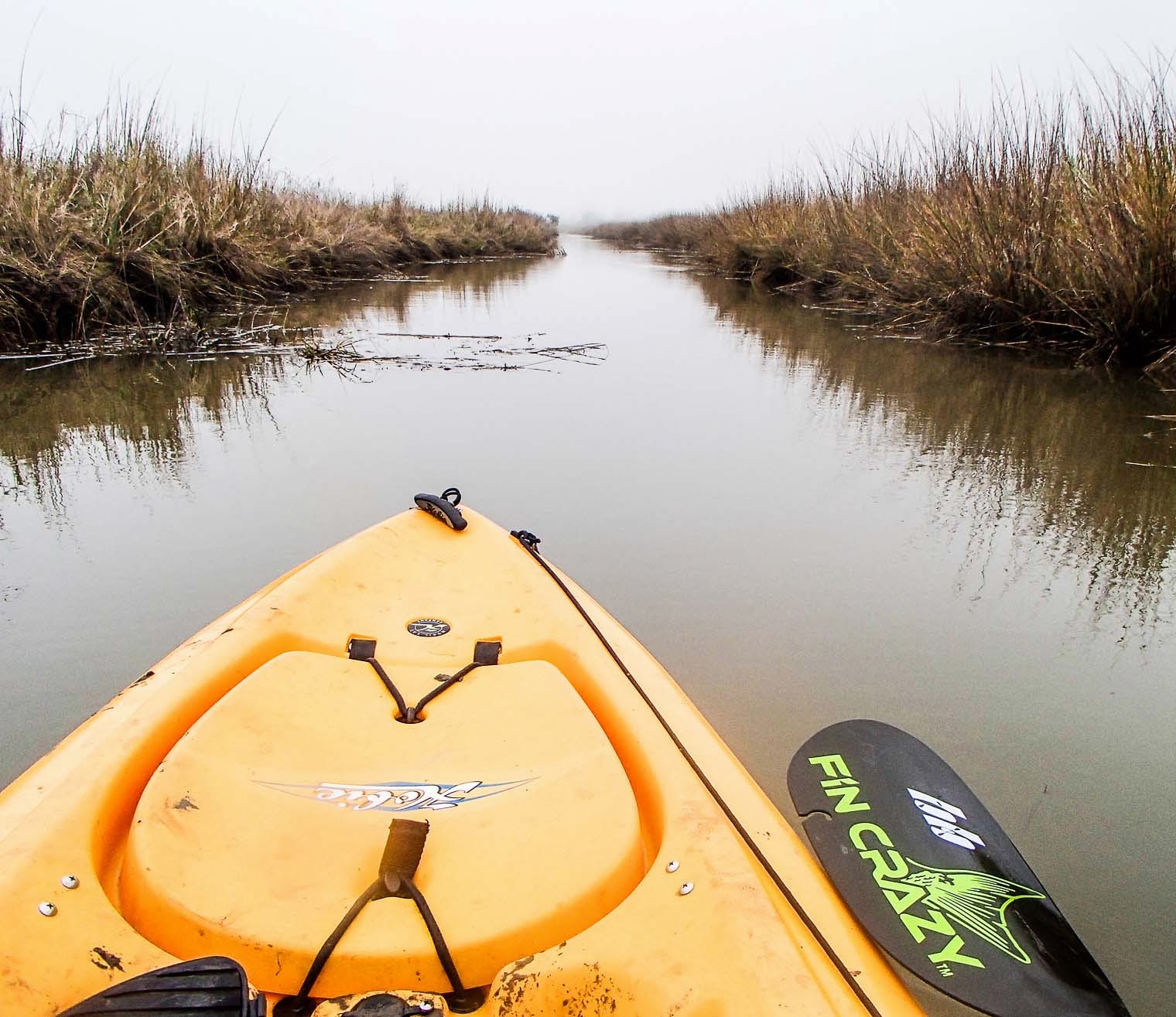 So, I found Putt Putt and we decided to make our way back to the truck.  But on our way I wanted to stop in to one more spot.  It was a location down a canal that was just big enough for two kayaks to paddle down.   You know those tiny canals that if a gator was on land he could just step into the yak with you.

Well what you don't know about ole Putt Putt, is he is deathly afraid of alligators and I didn't have it in me to tell him earlier that the largest gator I have ever seen in almost 40 years growing up in South Louisiana was in this area. 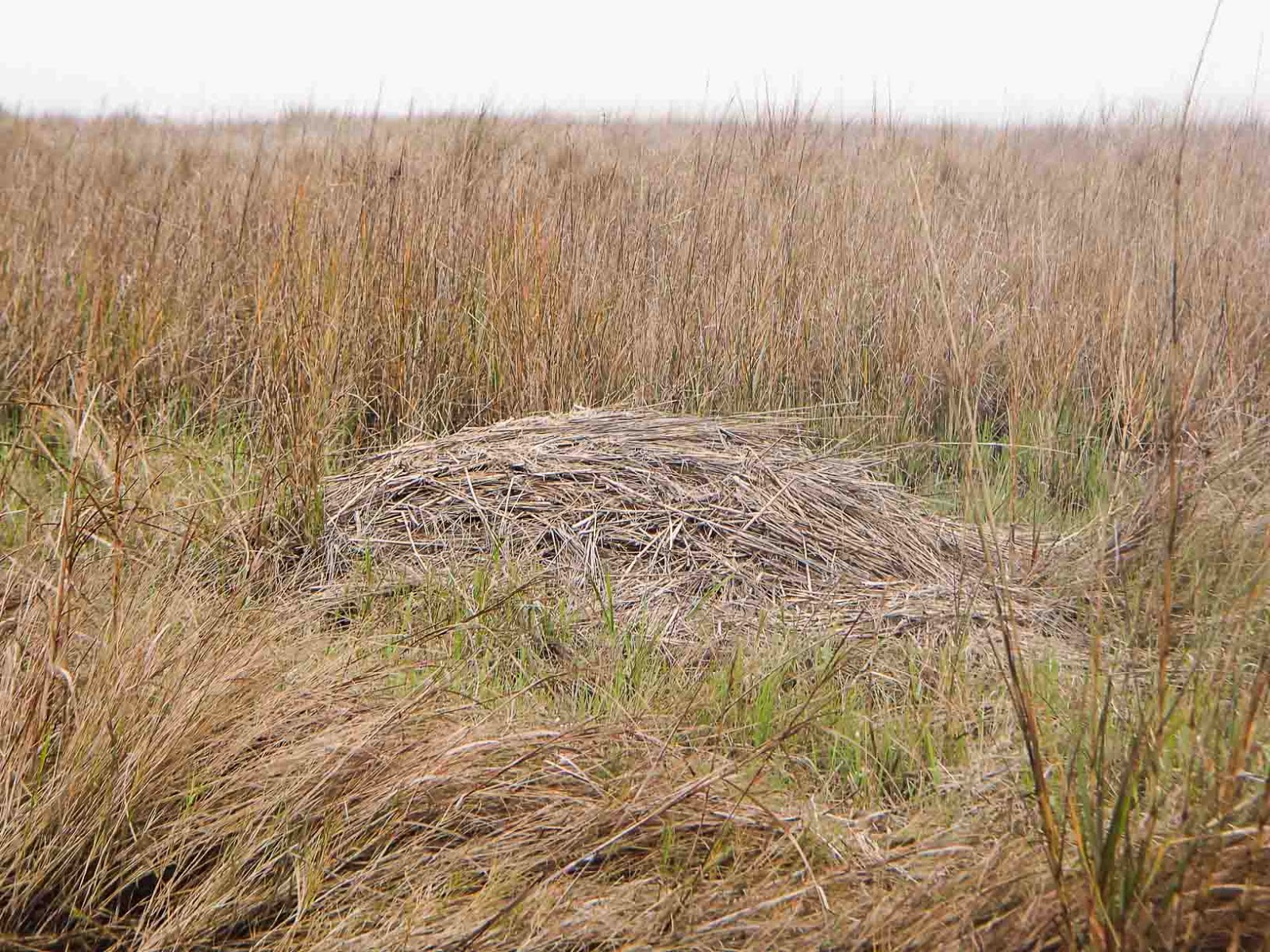 During our paddle down this tight go-devil type canal, we turned a corner and there was the largest bed I have seen in a long time.  I looked at Putt Putt and you could see his color starting to change. According to him, it was an alligator hotel, and he didn't want anything to do with it.  I asked him if would take a picture, as I got out and stood next to it, and he told me if I got out on land he was going to get his Hobie Outback up on a plane headed back to the truck.  Unfortunately for that,the picture doesn't do this habitat justice, but it is a well built home for some big critter.

Overall, we had a great day on the water, not a fish landed, but we learned some new waters, we learned where NOT to fish for future tournaments, and we had lots of laughs between being run down by pelicans, circled by hundreds of big ducks, wondering where that boat we heard was coming from, and playing Marco Polo trying to find each other.
Fishing in the fog has always been a favorite of mine being it allows me to hide from the rest of the fishing world, but fishing with Putt Putt really made the trip enjoyable.

Until next time, stay safe and Catch1
Posted by Unknown at 10:00 PM